If homecoming festivities at a few high schools in suburban Chicago can reflect a trend or a change in a way of thinking, take a look at Geneva High School, Round Lake High School, and Lake Zurich High School, the Daily Herald reports. 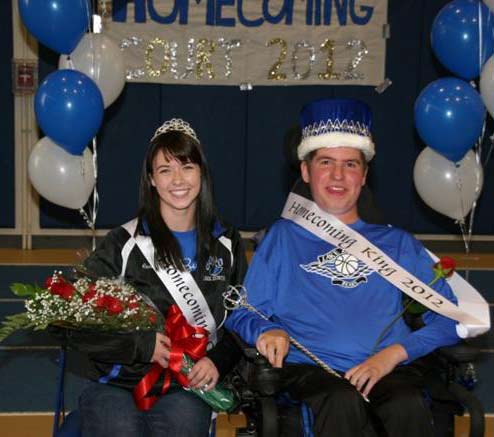 Pictured above are the queen and king for Lake Zurich High School’s Homecoming earlier this month. Casey Scott, the school’s Homecoming king, is in a wheelchair, because he was diagnosed with muscular dystrophy at age 5. His family knew his life would be full of challenges as a result of his disability, but they were probably unaware that 13 years down the road, American schoolchildren would find themselves on a massive anti-bullying campaign of inclusion. One less challenge, whew!

Two kids with Down syndrome, Thomas Broviak and Krissy Altersohn, led the Homecoming court at Geneva High School, and Bougest Sutton and Bryant Jenkins became the first same-sex pair to ascend to royalty at Round Lake High School.

I’m sure friend requests on Facebook have shot through the roof for these kids, who belong to groups in which students can feel more invisible due to their disabilities or sexual orientation than they would just for being teenagers. And this, I think, is a sign of our times. “I think the students were just ready to see a different type of kid be represented and be recognized,” the Daily Herald quoted a teacher and student council adviser at Lake Zurich as saying. Time for the adults to change!

I often say I’ve learned some of my most treasured lessons from my students, and this is one case where I think society in general can learn something from students who have taken a leadership role in defining a more inclusive world. Thanks to the students at these high schools for their bravery and friendship.