Illinois Marching Online and Voxitatis conducted a survey about the possibility of an IHSA-sanctioned marching band championship in Illinois. Some directors responded, and based on the results, we believe the official survey from the IHSA, being conducted this month, will show sufficient interest in a state championship series for marching band for the association to move forward with advisory committees for the event in the next year or two.

We will be releasing the results over the next few days on this blog, and the collection of these posts will be our final report on the subject until the Illinois High School Association announces its official results.

We asked directors the following questions: (left) Should Illinois sponsor and sanction a state championship series for marching band? and (right) Regardless of whether or not you think Illinois should sponsor a state championship series in marching band, do you think your school would participate in such a series if it were sanctioned by the IHSA? 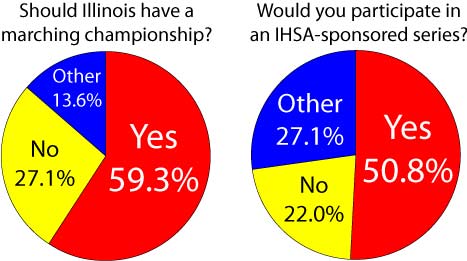 All respondents were certified staff at an Illinois high school, directly involved with marching band. A full analysis of the composition of the respondent pool will be released at the end of this report. Because of a very small sample size and a small population, our poll has a computed margin of error of 12.3 percent.

“Other” responses to participation (graph on right)

This is the first chapter in the report. The next chapter (link here when available) will examine some of the reasons why directors said ‘yes’ and ‘no’ to the question of whether Illinois should develop an official state championship series in marching band.

Paul Katula - Tuesday, February 23, 2021 0
Students in Md. will still have to take standardized tests this spring in math and English language arts, following action of the state board.

We publish a table of IHSA state champions