Arctic methane release may damage economy. Or not.

As increasing temperatures in the Arctic region reduce the sea ice cover, the possibility that methane gas will be leached from the sea bed into the atmosphere has been hypothesized by some climate change wannabes. The BBC posted an article, here, that calls the Arctic a “time bomb” of methane gas release that will have an impact of $60 trillion on the global economy over the next decade. 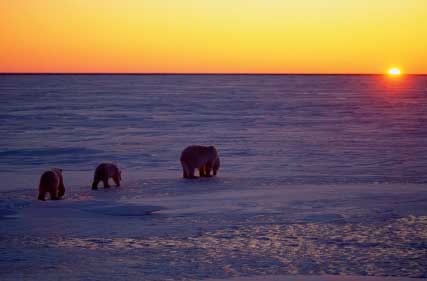 A polar bear leads her cubs across the Canadian Arctic tundra.
The theory behind this report is that methane gas, trapped deep below the sea or in the permafrost, will escape and form large blooms of methane gas in the atmosphere, particularly over the Arctic region. Research published in the journal Nature, a peer-reviewed journal, says this:

As the amount of Arctic sea ice declines at an unprecedented rate, the thawing of offshore permafrost releases methane. A 50-gigatonne (Gt) reservoir of methane, stored in the form of hydrates, exists on the East Siberian Arctic Shelf. It is likely to be emitted as the seabed warms, either steadily over 50 years or suddenly. Higher methane concentrations in the atmosphere will accelerate global warming and hasten local changes in the Arctic, speeding up sea-ice retreat, reducing the reflection of solar energy and accelerating the melting of the Greenland ice sheet. The ramifications will be felt far from the poles.

A research article published Wednesday in the journal estimates the total cost of the methane release in the neighborhood of $60 trillion, which was the approximate size of the total global economy in 2012. They said the bulk of the impact will arise due to climate-change effects, like flooding, sea level rise, damage to agriculture and human health, the BBC reports.

“That’s an economic time bomb that at this stage has not been recognized on the world stage,” the service quoted Professor Gail Whiteman at Erasmus University in the Netherlands, one of the study’s authors, as saying. “We think it’s incredibly important for world leaders to really discuss what are the implications of this methane release and what could we indeed do about it to hopefully prevent the whole burst from happening.”

As much as 30 percent of the world’s undiscovered gas and 13 percent of the undiscovered oil is in water. The New York Times reported that corporations are planning to take advantage of the melting ice cover to open up shipping lanes for natural gas across Russia and into China.

A stretch of thousands of miles of new ice-free water leads to China, and at least one company intends to ship the gas directly there, the Times said. “If we don’t sell them the fuel, somebody else will,” the paper quoted Mikhail Lozovoi, a spokesman for a company that owns vast gas-rich land in the Arctic, as saying last month with a shrug.

We also shrug our shoulders at this new research. The same journal published the following just about two years ago:

Catastrophic, widespread dissociation of methane gas hydrates will not be triggered by continued climate warming at contemporary rates (0.2°C per decade; IPCC 2007) over timescales of a few hundred years. Most of Earth’s gas hydrates occur at low saturations and in sediments at such great depths below the seafloor or onshore permafrost that they will barely be affected by warming over even [1,000 years].

Well, there’s a difference between affecting the global economy by $60 trillion over the next 10 to 15 years, as the current study suggests, and “barely” affecting it over even a thousand years. Which is it?

I really wish I knew, but this is just another lesson in being very careful what you read. Nobody wants the ill effects of global warming, but this is a problem that cannot be swayed by the research article of the day, as this one may well be. The solutions will be messy, and Nature should have taken greater care to couch this article in appropriate disclaimers.

Hope you enjoyed the picture of the polar bear and her cubs!