High school classes should start after 8:30 AM, the American Academy of Pediatrics said in a report earlier this year. Now officials in Anne Arundel County, Md., are taking a closer look at the possibility of delaying the start time from 7:17, its current value, to at least 7:30, the Gazette reports. But there’s pushback. 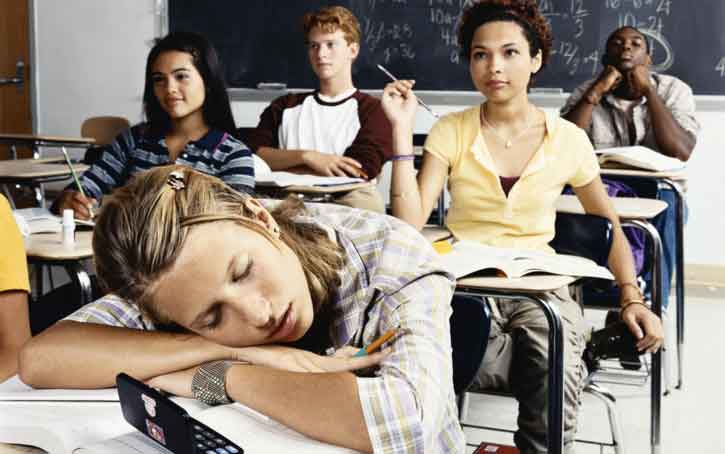 “Chronic sleep loss in children and adolescents is one of the most common—and easily fixable—public health issues in the US today,” wrote pediatrician Judith Owens, the study’s lead author.

The report found that students who get enough sleep are less likely to become overweight, suffer from depression, exercise poor judgment, lack motivation, and engage in risky behaviors.

The state is conducting a study of its own, which will be reported to the governor but will not be considered binding. The study group is made up of school officials, students, mental health professionals, athletic directors and representatives of advocacy groups like Start School Later. This year, 21 of Maryland’s 24 districts begin high school before 8:00. Six districts start before 7:30.

We have known for some time that the lack of sufficient sleep puts teens at risk of cognitive and emotional difficulties, disciplinary problems, negative moods, and lack of focus at school. But a new study, which evaluated about 20,000 adolescents, age 12 to 19, reveals that adolescents who suffer from sleep disturbance or habitual short sleep duration are less likely to progress academically, compared to those who receive sufficient sleep.

Christian Benedict, an author of the study, which is now in press in the journal Sleep Medicine, said that students who receive less than seven hours of sleep a night are at increased risk for failure in school.

I personally don’t see what the issue is. Every piece of research I can find says we should set the start time for high school to 8:30, because teens need about nine hours of sleep per night and are at increased risk of failure if they get less than seven on average.

Since most teenagers don’t even feel tired until after 11:00, it only makes sense to set the start time to accommodate their normal circadian rhythms.

A big part of the issue, of course, is that buses would have to be added in order to get high school students to their schools at the same time as middle and elementary schools start. “Something else is going to have to come off the plate with the budget in order to make it work,” the Gazette quoted Anne Arundel Superintendent George Arlotto as saying.

That’s not hard to understand, but by not doing this, even after we are aware this is an issue, is to fly in the face of decades of research. Younger kids get up earlier because they go to bed earlier, which they do because their bodies are tired at an earlier hour.

Some opponents of the later high school start time have argued that kids will simply go to bed later, thus nullifying any benefit of starting school later. You may think that, but it goes against biology. Kids are going to go to sleep when they feel tired, not before, not after. They still need between eight and nine hours of sleep every night, on average.

In other words, they probably don’t fall asleep now until after 11 PM, which means seven hours of sleep if they have to wake up at 6:00. That is unacceptable. If we delay the start of school to 8:00, kids would get an extra hour of sleep, because they would still fall asleep at about 11 PM, in accordance with their circadian rhythms and normal sleep patterns.

Previous articleHooky for 12:07 O's game
Next articleBoy who posted nude photos of a girl sues school

Teens getting less sleep than in 1991