INDIANAPOLIS (Nov. 14, 2009)—”Such high energy from such a small band,” one Bands of America analyst declared for a reporter after the performance by the two-time Kentucky Music Educators Association Class AAA state champions here at the Grand National Championships on the field of Lucas Oil Stadium.

This marching band, made up of a select few of the 804 students* enrolled at Bourbon County High School in Paris, Ky., near Lexington, also won the Class A championship at the Grand Nationals last year.

While they’re small in number, they aren’t small in sound, hence their championship this year as well in Class A and the winning of all the caption awards—best music, best visuals, and best general effect—in the class. Traditions are building.

Director Eric Hale and drum major Rachel Quinn bring the marching band to Indianapolis this year with “Forbidden,” a field show with trees as props, trees that trap our souls, denying us pleasures like fruits that not only nourish us but taste good as well. “Often man is denied …” says the show’s narrator, as dancers point the way to a world of temptation. 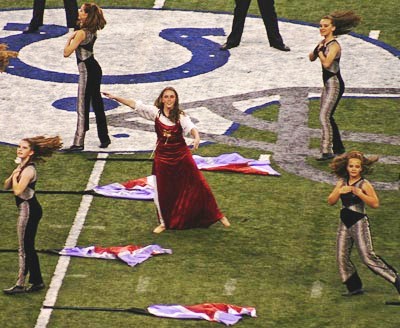 Later, the band’s bending at the knees shows our weakness, as we nearly succumb to the temptations of this life. But “we have only one life to live,” the announcer continues, and time is ticking away—a fact driven home by trumpets and mellophones around a huge clock.

The skit has the trumpeter in the middle trying to fight the hands of the clock and keep them from moving forward. He loses the battle. In one of the trees, a girl either dies or falls terribly ill after eating a forbidden apple, as bright red lights above her outline the piece of fruit that caused her demise.

But this unconsciousness is only for the character, not for this band, which has already begun work on next year’s energy-packed show. We look forward to seeing these champions again.

We are obligated to report that enrollment for public schools in grades 10-12 often cannot be confirmed from official sources, like state departments of education. At any given high school, though, the ninth-grade enrollment is likely to be higher than other grades because the dropout age is 16. At private high schools, this enrollment figure is usually impossible to verify.