INDIANAPOLIS (Nov. 14, 2009)—With a field show title like “Between Heaven and Earth,” we expected harps from the William Mason High School marching band from Mason, Ohio, here at Lucas Oil Stadium for their Bands of America Grand National Championships semi-final performance. They brought about 30. 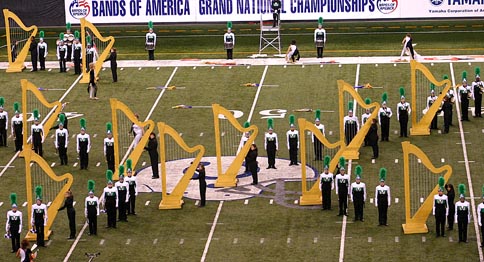 What we weren’t so sure about was which of the harp pieces by French Impressionist composers Claude Debussy and Maurice Ravel they were going to play. Each has several works to his credit that include the harp in the score.

In the early going, four soloists line up in front of a microphone. 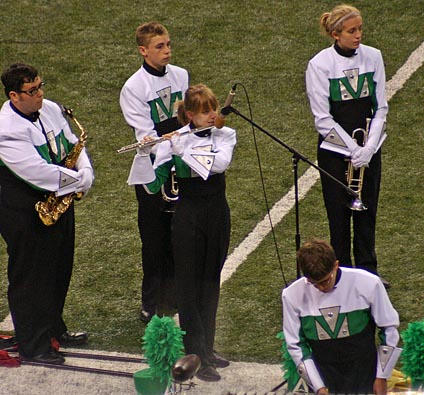 The flutist begins with Debussy’s Prelude to the Afternoon of a Fawn, which has been heard here a few times today. The first four measures establish the setting for the entire work:

Debussy didn’t really use major or minor scales to establish his tonal center. Rather, he used whole-tone scales, such as C#-D#-F-G-A-B-(C#) here. Note in the first measure, although notes are thrown in artistically as passing tones, the fundamental tonality is represented by a whole-tone scale, which musicians sometimes call a “pitch collection,” since it isn’t really a scale in the traditional sense.

While major and minor scales have mixtures of half steps and whole steps, the whole-tone scale has only whole steps, making it symmetrical, with the line of symmetry occurring at the pitch a tritone above the starting note. This symmetry is critical to the nebulous effect the whole-tone scale’s use has on the music in that the same collection of pitches would be used by starting on any note in the scale. Thus, the precise “home tonality” or “central pitch” is not clearly defined in the musical space.

Leonard Bernstein, in one of his Young People’s Concerts, did a much better job of explaining this. He compared Debussy’s music to an impressionist painting:

Have you ever looked at an impressionistic French painting? I’m sure you have, but maybe you didn’t know you were looking at one at the time; you just saw a picture that was sort of blurry and hazy, that didn’t have a real look. Like this painting here by the great impressionist Monet of the front of the Cathedral at Rouen.

The whole-tone scale, Bernstein said, produces sort of a hazy glow of light bouncing off the tonal images painted in the music. We aren’t quite as clear about what we’re listening to in terms of its tonality: “Sort of mysterious and spooky; as you can hear, it’s much less definite and final-sounding than the ordinary scales,” he said. He described Debussy’s use of the whole-tone scale as producing a “delicious little impression of hazy sailboats in the half-light, floating, airy, and without any definite outlines.” 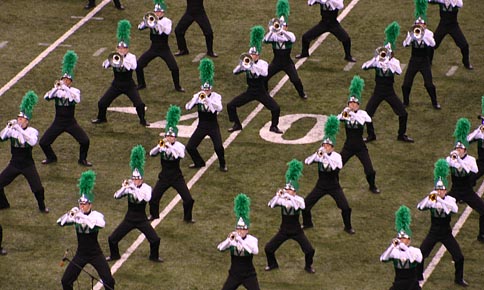 As with any good impressionist work, we hear a suggestion of rays of light shining out of the misty sea, provided by a stellar euphonium solo. As with any good field show, we see suggestions of heavenly angels pursuing and then getting their wings. 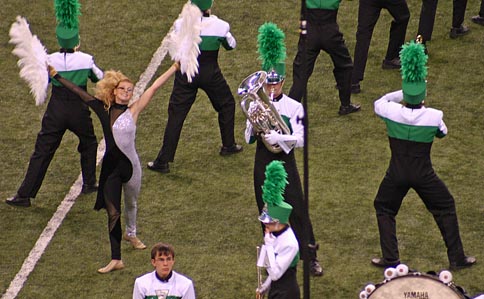 “And from there on the music grows in power and color and movement, until at the very end the sun has climbed to the height of noon and hangs there, blazing in space,” Bernstein said.

Except here it’s not the sun at noon; it’s an angel at the 50-yard line, coming out of the mist of musical expression for the show’s final set as band members present her. William Mason uses the music of Argentine composer Alberto Ginastera (1916-1983) to underscore her accomplishments. He also has a few harp pieces on his list of works: a harp concerto (Op. 25) and a sonatina for harp (no opus number).

However, Ginastera might be better known outside classical music circles. The rock group Emerson, Lake, and Palmer adapted the fourth movement of his first piano concerto for their album Brain Salad Surgery, titling the track “Toccata.”

According to the album liner, Keith Emerson played his arrangement of the piece for Ginastera at his home in Switzerland. Ginastera, who spoke almost no English, said the arrangement was “diabolical,” causing Emerson to become upset and nearly cancel its use on the album.

Ginastera’s wife stepped in to say Ginastera meant the arrangement was “frightening,” which was exactly how he hoped he had written it. Emerson misunderstood, assuming Ginastera was using the English word to mean “having the qualities of a devil.” But he later told Emerson, “You have captured the essence of my music, and no one’s ever done that before.”

Capturing the essence of Debussy, Ravel, and indeed Ginastera, the William Mason High School marching band is directed by Robert Bass and led on the field by drum majors David Chrzanowski, Anthony Jones, Kelsey Owens, and Andrew Swartz. Band members have their own Facebook page, and on YouTube, you can watch the final minute and a half of their closer, as performed at the Bands of America super-regional in St. Louis a few weeks prior to the Grand Nationals.