“We’re trying to get as much information as we can about scholarships, and applications, and everything else we need to know,” the Sun quoted one high school junior’s mom as saying, adding that she hopes to see her son studying at USC two years from now.

From the descriptions, it was one big pep talk, especially directed at African-American and Hispanic students, encouraging them to work hard in a field of study that interests them, despite the high level attention schools have to pay to math, science, and English right now: Dream big, and do whatever they have to do in order to empower those dreams, the message seemed to be.

Tomi Johnson, one of the presenters, advised students who wanted to go to college to organize early, bring as “dynamic” a list of interests and accomplishments to the application process as they can, and think carefully about where their interests, talents and passions lie, the article said. 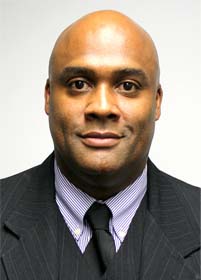 Since the NAACP sponsored the fair and the turnout was spectacular, at least compared to last year, school administrators in attendance took home a message of their own.

Kathy Birkett, the superintendent for Indian Prairie Community Unit School District 204, which includes Neuqua Valley, said one of six overall goals in the district is to close the achievement gap that has existed for several years between students who are white or Asian and those who are African-American or Hispanic.

“A big piece of it is taking a look at the systems that are getting in the way,” the paper quoted her as saying.

Valley View School District 365U Superintendent James Mitchem (pictured), who is African-American, said, “I think sometimes people are blinded by their privilege, and they don’t really see how they are marginalizing other people. Our kids enter the system as kindergartners, and they find out very quickly that we’re not valued.”

I believe Dr Mitchem hits this nail on the head. The achievement gap, which is real, between races in terms of academic achievement is not a function of race itself; it’s a function of our attitudes about race.

If any kindergartner, of any race, got the message from peers or, especially, from adults at a school that he wasn’t valued, that kid would become discouraged, which would bog down any attempt to educate him. But encourage him from an early age and tell him that what he’s interested in is important in terms of helping him grow into a valued member of society, and the sky’s the limit—or maybe the White House.

The achievement gap, in this way, fuels itself: kids get discouraged and don’t put in a good effort to learn when they’re young, they fall behind and receive further messages from the system and their more accomplished peers that say they have a propensity to fail, which discourages them some more, which leads to further failures, and so on, and so on.

A few studies, released in the last year, say the poor-affluent achievement gap is more significant than the black-white achievement gap. It’s bigger and more important for us to deal with.

“We have moved from a society in the 1950s and 1960s, in which race was more consequential than family income, to one today in which family income appears more determinative of educational success than race,” said Sean Reardon of Stanford University, quoted in the New York Times. He found the gap in standardized test scores between affluent and low-income students had grown by about 40 percent since the 1960s and is now double the testing gap between races.

The gap between the rich and poor in America is also widening with respect to college completion rates. The gap increased by 4 percent for low-income cohorts born around 1980 relative to those born in the early 1960s but by 18 percent for corresponding cohorts who grew up in high-income families, Martha J Bailey and Susan M Dynarski found in a December 2011 study for the National Bureau for Economic Research.

Well, first of all, the black-white achievement gap still exists in general, and second, it is often closely related to the poor-affluent achievement gap, at least in several regions of the US. We know, for example, that in a 2002 study out of the University of Michigan, 34 percent of black children and 29 percent of Hispanic children were in the lowest quintile of socioeconomic status, compared with only 9 percent of white children. However, cognitive skills are much less closely related to race or ethnicity after accounting for socioeconomic status.

As we reported earlier this month, though, we need to be careful not to let our personal biases, on either side of the school improvement debate, cause us to send messages to kids of color that they will most assuredly fail or that not putting forth effort is acceptable given their circumstances. That is, we can’t tell them, as Michelle Rhee and other corporate reformers would say, that their poverty and other problems aren’t real. And, we can’t excuse bad behavior, lack of trying, and so on, because of our compassion for their circumstances.

Kids come into the world color blind. They only know the world they inhabit, yet they eventually have to succeed in the same world that belongs to all of us adults. In order to do that, they have to be positive about who they are and about their relationship to others, and they have to look on their own circumstances with a positive attitude and an interest in understanding the world and helping themselves and others.

Some other factors* associated with race from the 2002 study, besides socioeconomic status:

The Naperville Sun quoted Dan Bridges, newly appointed superintendent in Naperville Unit District 203, as acknowledging the school system was more diverse than it had ever been. He said the system needs “to understand who we are,” which involves paying less attention to past achievements and focusing on future objectives instead, the Sun reported.

Relevance is one key to understanding Common Core