In the Illinois Marching Online-Voxitatis poll regarding the possibility of a state championship series for marching band in Illinois, we asked directors how important certain pre-identified elements were in contributing toward a high-caliber marching band. All but a few responded to this request. 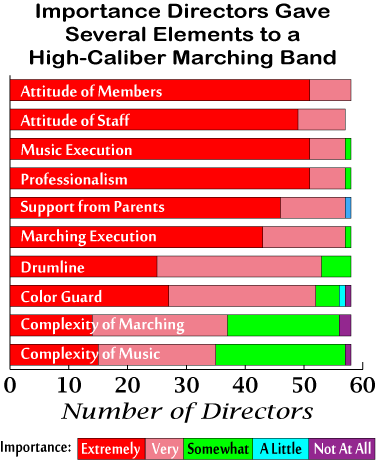 More than half of all directors who responded to our poll gave rankings of “very important” or “extremely important” to every pre-identified element on our list.

The qualities of a champion

Directors said “attitude” was slightly more important than “execution”—not by much, but “attitude” cannot be ignored. The question is, How can attitude be measured by adjudicators so those elements contributing to the determination of a championship marching band are reflected in the naming of any champion?

We can certainly measure music execution, but an objective-appearing scoring rubric with exemplar performances at critical cutpoints would have to be developed, along with proper training for judges. The same goes for drumline, color guard, marching (visual) execution, and any general effect trait that would be used on the score sheets.

But how do we measure “support from parents” or “professionalism”? These qualities, according to Illinois directors, are very or extremely important, and if a champion is to be named, some consideration for these important elements should be reflected in the scoring rubric.

Standardized tests and the sparseness of a curriculum

If we learned anything from the Chicago teachers’ strike earlier this year, we learned that the contribution of standardized test scores and other value-added models should be, at best, combined with other measures of teacher effectiveness.

As we and several other news organizations reported, several researchers signed an open letter regarding the use of standardized tests to compute “value-added” scores for teachers in Chicago. Among the concerns expressed was a narrowing of the curriculum:

Concern #3: Students will be adversely affected by the implementation of this new teacher-evaluation system. … [T]est scores take front and center. The nurturing relationship between teacher and student changes for the worse, including in the following ways:

We might expect this narrowing of the curriculum to occur if a marching band strives to reach a state championship instead of devoting time to the ongoing artistic and personal growth of its student members with the band director as a mentor or coach.

On the upside, whatever scoring rubric is used by a state championship series will serve as a model that many schools in the state will strive to achieve. For some schools, where programs have no marching band or one that has not been developed as well as our state’s Marian Catholic-like bands, simply putting any guidelines in place might help motivate the development of a marching band program.

However, it might also result in those schools setting unrealistic, unattainable, and irrational goals, as we have previously mentioned in earlier chapters of this report. This has the potential to result in a decrease in the self-esteem of students who are unable to reach those goals through no fault of their own.

For example, their districts may not be able to invest the funds to buy materials for marching band. In such a program, even if attitude were great and every band member’s parents wanted to help build props and accompany the group to state contests, the materials and buses might not even be available.

And for schools that already produce championship-quality marching bands, conforming to new guidelines, put in place solely for the naming of an Illinois state champion, might actually be detrimental to the general quality of the program, since important elements of the program can’t be assessed on a score sheet. Or can they?

The role of a curriculum in educational endeavors

Consider fourth-grade mathematics. Students generally learn how to compare fractions with unlike denominators in about fourth grade under the Common Core, which Illinois has adopted. This is something that is easily tested. Teachers teach this skill in fourth grade partly because it’s assessed on the ISAT and will be assessed on whatever test PARCC develops in the coming years. Learning fractions is important, and so we can’t knock schools for teaching kids about them.

However, many elementary schools are cutting arts education, physical education, and even the amount of time spent on science exploration and discovery. These changes began long before No Child Left Behind required schools to spend sufficient time on math and reading so every single child could pass the state test. This unprecedented focus—caused by standardized testing—has significantly narrowed the fourth-grade curriculum.

Now think again about high school marching band and the curriculum behind that. Directors told us they think it includes things like “professionalism” and “attitude,” those intangible qualities that we can’t find (explicitly) on a marching band festival score sheet.

That variance is what produces bias in scoring, bias in adjudicators’ feedback, and a lowering of the bar when it comes to the education we provide for students in Illinois.

Plus, marching bands—including the good ones to a greater or lesser degree—will start to narrow the curriculum to focus on those qualities that can be assessed by state championship adjudicators and yield higher scores. The intangibles will suffer, just as physical education, the arts, and science suffer in our state’s fourth-grade classrooms.

This is the fourth page in our report. The previous chapter, entitled “Why some directors don’t want an IL marching band state championship” is available here. The next chapter (here) considers responses to these questions from people who took our poll but did not identify themselves as directors.