Moon near Jupiter for 2nd time in November

The moon and Jupiter paired up in the sky on Nov. 1, and they now cross the night sky in rather close proximity on Nov. 28, the November 2012 Guide to the Five Visible Planets notes in EarthSky. 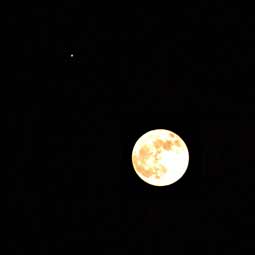 A penumbral eclipse of the moon occurred just a few hours earlier, and the crest of the full moon occurred this morning, Nov. 28, at 8:46 a.m. Central Standard Time (14:46 Universal Time).

The Earth will pass between Jupiter and the sun in just a few days, on Dec. 2. This gives Jupiter the appearance of being even brighter than it usually is. On this night and for the next few nights, the moon will be the brightest object in the night sky, and its traveling partner, Jupiter, will be the second-brightest.

Paul Katula - Sunday, September 12, 2021 0
Why are Black adolescent girls committing suicide at increasingly higher rates in the US? Could it be an effect of racism and prejudice?

IL dist. to pay $35K to student over gun speech

All original reporting is available for reuse under a Creative Commons Attribution-NonCommercial-NoDerivatives 4.0 International License.
Published in Baltimore. Thank you for your support of our students, schools, and communities.