Charles Co. to get planetarium; kids talk with astronauts

About 20 students at La Plata High School in Charles County, Md., had the opportunity to speak with two astronauts on the International Space Station the Tuesday before Thanksgiving as part of NASA’s Teaching from Space initiative. Charles County, which serves about 26,000 students in southern Maryland, is one of seven school districts selected to participate this year, Southern Maryland Online reports. 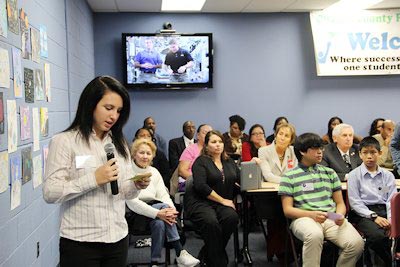 Students at La Plata HS talk with astronauts, Nov 26 (submitted photo)
This happened the same day the school system announced it would name its new science center the James E Richmond Science Center, after the former superintendent of schools and astronaut. The science center will feature a digital, 180-seat classroom equipped with a “Science On a Sphere” interactive globe that creates a part-planetarium, part-IMAX theater learning atmosphere, T.H.E. Journal reports.

If you would like more information about “Science on a Sphere,” developed by Dr Alexander “Sandy” MacDonald, who directs the National Oceanic and Atomospheric Administration’s Earth System Research Laboratory, see the Web page here.

The SOS system comes with a high price tag, which the district couldn’t afford six years ago, when they first learned about SOS. Especially since the district didn’t really have a good building to house the equipment, they opted for less expensive systems that still had the same “Wow factor” and could display animated day and night skies, atmospheric conditions, and land in a panoramic view, T.H.E. reported. Then they purchased a few more less expensive globes, known as “Magic Planet,” even using them in pre-K to demonstrate the seasons of the year.

But now, the James E Richmond Science Center should take STEM education to a new level, especially the science part of STEM. “We wanted to make the subject matter both relevant and exciting,” T.H.E. quoted Monique Wilson, director of the science center, as saying.

She also said one of the objectives was to increase involvement from minority students in STEM classes. “We have a large minority population, but we learned that [minority] students weren’t being reflected in STEM-related opportunities,” she told T.H.E. “In fact, over the years, we found that it was predominantly [Caucasian] males that were able to participate.”

Increasing the focus on STEM education

Other schools in Maryland are increasing STEM awareness as well. STEM stands for science, technology, engineering, and mathematics, so efforts are under way to provide more learning experiences for students in these disciplines. It’s especially noticeable at the high school level, where in many cases, kids are preparing for jobs in technical and scientific fields.

Tuesday at Pikesville High School in Baltimore County, representatives from the Johns Hopkins University Applied Physics Laboratory, the University of Maryland School of Medicine, the Food and Drug Administration, and a few other organizations that have a vested interest in promoting education in STEM-related fields, talked to students, trying to convince them of STEM’s real-world benefits.

The Maryland Business Roundtable for Education, which launched the STEM Specialists in the Classroom Program in 2010, brought them there, the Baltimore Business Journal reports.

Baltimore County Superintendent of Schools Dallas Dance had high praise for the STEM Specialists program. “Connecting our students with STEM professionals who can educate them about career options and engage them in inquiry-based learning broadens our students’ understanding of what they can do and the impact they can have,” he was quoted as saying.

The goal of the program, which now serves about 25 schools, one in every school system, but hopes to expand to about 90 “STEM Innovation High Schools” within a few years, is to show students how what they learn in STEM classes is relevant to the daily tasks of professionals in good careers.

Building 30, Johnson Space Center (Mission Control)
Note: Photographs are not possible inside Mission Control.
Kids at La Plata High School, during the NASA downlink, got that message loud and clear on the telepresence screen: “We are ready. Charles County Public Schools, this is Mission Control Houston. Please call station for a voice check.”

Well, the astronauts and Mission Control in Houston are ready. Are you ready when it comes to STEM? Because as sure as anything ever was, high-tech, math, and science are going to be big movers in the 21st century.