It used to be, tall girls who were athletically inclined in high school would go out for volleyball in the fall and basketball in the winter. Not so much, anymore, as girls in Chicago-area high schools, for reasons both well understood and mysterious, seem to be losing interest in basketball, the Chicago Tribune reported earlier this month. 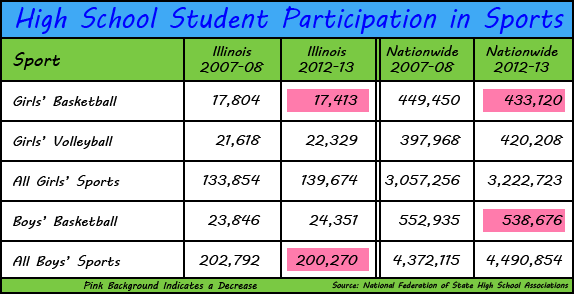 Pink squares indicate a decrease in the number of participating students.
Based on numbers from the National Federation of State High School Associations, the Chicago-area trend mirrors both a statewide and a national trend in girls’ basketball, even though total participation by girls in all sports is up over the same period.

The Tribune cited many coaches from high schools in the suburbs who say participation in girls’ basketball has fallen. According to the report, participation has fallen about 2 percent over the last six years.

“It’s surprising, because this area has been pretty good for girls basketball,” one first-year coach was quoted as saying. “I don’t know where the disconnect is happening. That’s one of the reasons I’m here. I’m trying to figure that out.”

A few possible reasons for the decline in participation:

Club sports, notably volleyball, keep girls from participating in basketball because club teams play during most of the year, except during the high school season, and we note an increase in girls’ volleyball participation both in Illinois and across the nation.

Girls may also be more aware of broadening their options for college than boys are. This leads to girls opting to participate in club teams, which are a prime recruiting ground for colleges and universities.

The Tribune also noted that girls are more likely than boys to ditch the “manliness” of basketball in favor of other activities like dance, which could be considered more feminine. They might also choose the winter to participate in fine arts programs or just study more, one coach said.

Studies have found that newspapers report differently about girls’ basketball than they do about boys’ basketball. For example, a study out of Penn State in the journal Mass Communication and Society, here, found that in coverage, “girls were generally not framed as overtly feminine. Still, the coverage also reflects lingering commonsense assumptions about gender, most notably in reference to the athletic body.”

Girls, of course, read newspapers, and the desire to avoid being reported on as anything other than feminine because of their participation in basketball may drive them away from the sport, the Tribune’s reporter speculated. Newspapers across the country do report on boys’ basketball a little more than girls’ basketball, but the gap isn’t as wide as we once thought, the Penn State study also found. More likely, it’s the way in which female basketball players are described in the media that drives girls away from the sport, rather than any unfulfilled need for recognition or visibility, which seem to be on par with that given to boys.

But there may be more at play than simple gender stereotypes. “I think girls look at it like, ‘I’m going to college anyway. I don’t need basketball,'” Brian Mays, coach at Rich South High School in south suburban Richton Park, was quoted as saying. “In a sense, they’re smarter than some of the boys. They’re more realistic.”

Basketball can give girls some of the college skills Mr Mays spoke of, because the simple success of the varsity program “is not what high school athletes are all about,” Chris Livatino, athletic director at Evanston Township High School, was quoted as saying. “We want girls to participate because sports will teach you all sorts of things you won’t get in a classroom.”

That means involvement of freshmen is as important as having a top-notch varsity team. Evanston Township has one of those top-notch varsity programs every year, it seems, but it’s interesting to note the coach is also looking at the freshmen coming in. Important research suggests that activities like sports can make the transition to high school easier, although studies that isolate basketball aren’t readily available:

Organized activities (OAs) have been established as important contexts of development … across the high school transition in buffering adolescents’ social adjustment by providing opportunities for visibility and peer affiliation. The transition to high school is characterized by numerous changes, and OAs may provide an important setting for establishing and maintaining peer relationships during this tumultuous time. … Continuous involvement in academic activities across the transition and becoming involved in community/service activities following the transition was associated with fewer depressive symptoms in the spring of 9th grade. Continuous involvement in sports and initiation of academic activities was associated with having more friendships. In addition, links between OAs and loneliness were only evident among females.

The above abstract, from a study published in June in the journal New Directions for Child and Adolescent Development, leaves me somewhat skeptical that basketball is better than any other sport for girls at those “sorts of things you won’t get in a classroom.” Which leads me to conclude, volleyball, basketball, field hockey, competitive dance, or whatever, girls are getting into some organized activities as freshmen and continuing to develop their interests, although the move is away from basketball. It’s really anybody’s guess as to why that’s happening.