Some girls commit to a college before 9th grade

It’s hard to miss a story about eighth-grade girls playing soccer on the front page of the New York Times, here. In a comprehensive story about college soccer recruiting practices for girls, Nathaniel Popper opens up the door to the lives of several eighth-grade girls around the country, some of whom have more than a dozen college recruiters’ numbers programmed into their smartphones. 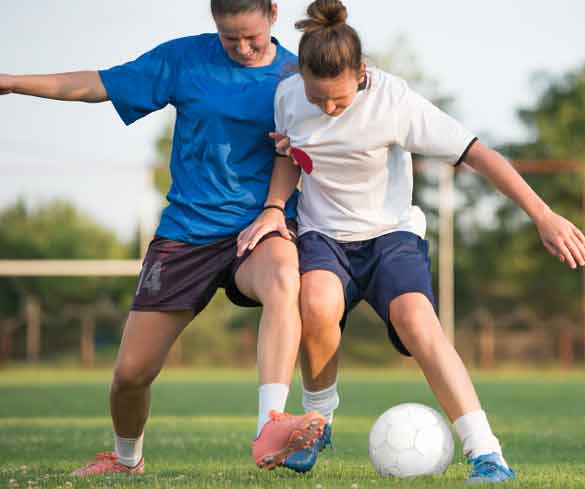 Although the rules published by the National Collegiate Athletic Association don’t allow college recruiters to call on student athletes until July after their junior year, those rules have more loopholes than the US tax code, it seems. And the NCAA has not expressed any interest in enforcing its own rules or closing the loopholes, mainly because much of the recruiting activity takes place outside official channels as recruiters take advantage of every loophole that suits them.

One loophole, for example, is for recruiters to leave word with club coaches and not talk to the girls in person. Once the club coach delivers the message, which some refuse to do until at least their players’ sophomore year, the girl calls the coach or recruiter herself. The NCAA rules don’t prohibit recruiters from answering the phone, just from making the calls.

Recruiters and college coaches interviewed for the story unanimously thought it was unethical to recruit 13- and 14-year-olds for college soccer teams and that it was bad for the game and for the girls. But every one of them showed up at a big tournament for girls’ soccer players in Sanford, Fla., to check out the commodity of 14-year-olds who can kick a ball around. “It’s detrimental to the whole development of the sport, and to the girls,” Angela Kelly, the women’s soccer coach at the University of Texas, said at the Florida tournament. Why are they there? Because they feel if they don’t do early recruiting, other schools will take all the top talent and they’ll be left with the least sought-after players.

Parents share many of the same sentiments. One Dallas father of a sophomore said he watched girls on other teams get scholarships, because, he said, the coaches on his daughter’s team weren’t doing enough to steer the recruitment process. “Is it a little bit sick? Yeah. You are a little young to do this, but if you don’t, the other kids are going to,” the Times quoted him as saying, explaining why he transferred his daughter to another team that was put in view of college recruiters a little better. And so it is in a world where competition reigns and people pay no attention to what’s best for kids, even their own kids.

One may think this “I don’t want to do it but I have to because everybody else is doing it” attitude is selfish or childish, but even President Barack Obama displayed a side of it in February 2012, when he finally accepted the need for his campaign to accept money from super PACs. “We’re not going to fight this fight with one hand tied behind our back,” Jim Messina, the manager of President Obama’s reelection campaign, said in a February 2012 interview in the Times. “With so much at stake, we can’t allow for two sets of rules. Democrats can’t be unilaterally disarmed,” he said, defending the president’s decision.

One girl, who committed during her high school freshman year to play at the University of Arkansas on a full soccer scholarship, said coaches from several colleges would want to talk to her every week to see how her game was progressing. Even though she reported suffering from little breakdowns during the process, after she accepted Arkansas’s offer, she said she was just relieved. “You are making this big life decision when you are a freshman in high school,” the Times quoted her as saying. “You know what you want in a week, but it’s hard to predict what you’ll want in four years.”

And sometimes, it doesn’t pan out, because as the young athlete said, kids’ interests and abilities change a lot during their high school years.

By the time many of the girls get to college, their coaches find out that even though they were better than every other eighth grader five years earlier, they never matured as a player and can’t play at the college level. In other words, a Title IX scholarship goes to waste on a girl who has to sit on the bench for four years, isn’t happy about her college life as a bench warmer, still has to meet physical presence requirements for the team, and will probably not get much out of her education.

If you are one of these girls or one of the “exceptions” for whom early recruiting did work out, please post your story in a comment to this article or email it to editor@schoolsnapshots.org.