WBEZ (NPR in Chicago) talked one afternoon this week with Jeffrey Gray, president of Hales Franciscan High School in Chicago, which went coed this school year, and Janet Hyde, a psychology professor from the University of Wisconsin. 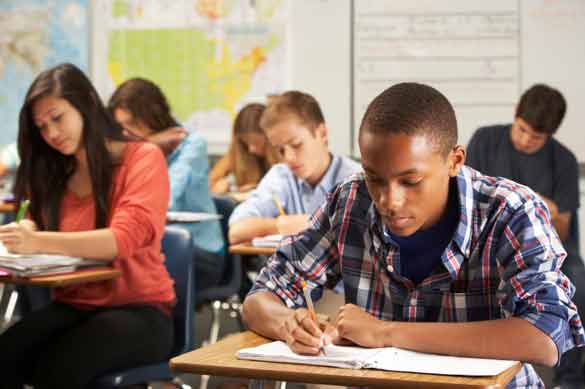 Hales Franciscan on Chicago’s south side at 49th and Cottage Grove is a Catholic high school. It is not a public school, but it serves a little over 100 students nonetheless. Since 1962, the school has enrolled only boys, and then, in August, they opened their doors to girls for the first time. About a dozen girls enrolled, including freshmen, sophomores, and juniors.

Mr Gray said the decision to enroll girls was done partly to increase enrollment and revenues at what is one of the least expensive Catholic high schools in the area. Tuition is $7,500 per year. But the decision was also encouraged by alumni, he said, who liked the education they received at the school and wanted their daughters to receive the same quality education.

When he was asked whether having girls at the school had caused any disruption, he immediately responded that it had not. Even a sexting scandal earlier this year he attributed to kids doing something they shouldn’t do and needing counseling to correct it rather than to girls being in the school. Most of the students who attend Hales Franciscan come from K-8 schools that are coed, he said, and having girls around was “no big deal.”

WBEZ brought in Dr Hyde to confirm that there isn’t any peer-reviewed science that supports the notion that same-sex classrooms improve students’ performance on test scores. Most of the so-called evidence is anecdotal, she said. Plus, when public schools set up single-sex programs, “they throw a ton of resources into it,” she said. “They get the best teachers they can find, kids get the best computers, and all that sort of thing. … It’s not at all clear that the single-sex configuration has anything to do with the success.”

Comparing single-sex classrooms to coed classrooms is still a popular argument for single-sex proponents. For example, a paper by five authors including Tam Dang, available here as a Word document, identifies several reasons why it might be good to keep girls and boys separate in schools.

“One benefit of having same-sex classrooms is the capability to specialize appropriate curriculum focused on the developmental needs of the particular gender,” the authors write. “Girls and boys orient, process, and react to certain social and physical cues differently.” In other words, girls are wired differently from boys.

With an anecdotal account of sixth graders, the authors cite one “study” in which 60 percent of the students said they could concentrate better in single-sex classrooms. “As a result, both boys and girls should be able to perform academically better in specific subjects,” the authors “conclude.”

No evidence supports any theory of better academic performance, just a hunch.

Dr Hyde characterized studies like this as “pseudoscience.” And that’s true: there’s no test score that shows any benefit whatsoever to same-sex schooling. She also called any push to convert classrooms in public schools to single-sex classrooms a fad—”novelty-biased enthusiasm,” she called it.

But the term ‘pseudoscience‘ in this context is a direct reference to an article in the peer-reviewed journal Science: Diane Halpern, et al., The Pseudoscience of Single-Sex Schooling, Science 333:1706–07 (2011).

Since the article’s appearance, the ACLU has launched a sort of campaign wherein they write letters to public schools that separate, say, algebra classes into a boys’ algebra class and a girls’ algebra class. The letters claim that separating boys and girls like this violates Title IX of the 1972 Education Amendments as well as the Equal Protection Clause of the 14th Amendment.

A study by St John’s University School of Law found that the ACLU was right in stopping practices that violated Title IX or the Constitution but wrong in its “sweeping attack on single-sex education.” The authors reject “the faulty analogy [used by the ACLU and referenced a few times by Dr Hyde in the WBEZ interview] between racially segregated and current separate-sex programs.” They called on “researchers to look more broadly at measures of program success beyond achievement test scores” and “educators to focus on individual student development rather than sex-based differences.”

Test scores neither support nor (fully) refute these claims

Mr Gray admitted no scientific advantage to same-sex classrooms but put the question in the context of history. Hales Franciscan was started by Franciscan brothers who wanted to create a school for boys and wanted to serve as mentors for those boys, he explained.

These are the factors “beyond achievement test scores” that the St John’s study sought, and we admire Mr Gray’s willingness to bring these elements into the conversation.

In all-girls’ schools, the same stories exist: Many girls claim they get less attention from teachers in classes like math and chemistry if there are boys in the class, but in these anecdotes, there is often no basis for comparison, since the girls have only been in one type of chemistry class. And the facts—such as many girls at coed schools becoming valedictorians, having higher GPAs than boys, and so on—don’t support these anecdotes.

In the end, having separate classes for boys and girls within a coeducational school probably does violate federal law and the Constitution.

Plus, “the adult world is coed … in the workplace, in families,” Dr Hyde said. “Schools should prepare students for adult life. … We need to question why people would think we should separate the sexes. You used to think that maybe in the 1800s, but I think certainly not in 2014. And there just aren’t any scientific advantages. So we just have to get rid of the stereotypes and replace them with more logical thinking and with science.”

I would just like to see “science” represent a lot more than “test scores,” and that’s where I’ll leave it. To me, this is little more than Hales Franciscan responding to the requests of its community. They’ve got a few girls whose parents honestly believe the education they receive at Hales Franciscan will be good, and even though their reasons are anecdotal, I applaud the school and its leadership.