The team from Chicago’s Uplift High School made quick work of it against Senn, defeating them 76-44 in the boys’ basketball regional round, which began Monday. The game was played at Richmond-Burton High School and broadcast on the Illinois High School Association TV network. 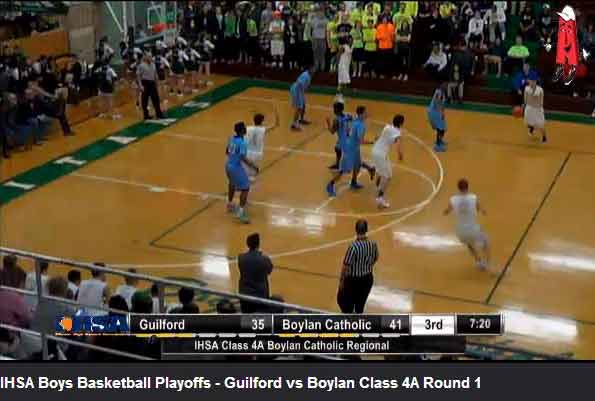 Boylan plays in their home sectional against Guilford on IHSA TV
Uplift is one of three boys’ basketball teams from the city playing without their head coaches in the state tournament—the other two are Bogan and Hyde Park—because of rules violations. The teams were originally suspended last week, but an appeal to the IHSA turned out to be fruitful: Students can play, but coaches have to stay away from the team until after the tournament is over.

So, for example, Uplift coach David Taylor can’t coach his team in any fashion during the tournament, the Chicago Tribune reported. “Can’t be in the gym during games, can’t be at practice, can’t consult with them about basketball at all until the state tournament concludes,” the paper quoted him as saying.

Uplift broke the IHSA rule that specifies the maximum number of tournaments in which teams can play during the regular season. Mr Taylor said he didn’t even know one of the tournaments, the one in Metamora, was considered a “tournament” until after the contract for his team’s participation had been signed. But what’s done is done, and he said he’s glad his team wasn’t punished for his mistake.

Bogan and Hyde Park, which, like Uplift, are competing in Class 3A, simply played one more game than is allowed during the regular season. The teams all sit near the top of their sectionals, and all played their first tournament game Tuesday evening. Bogan defeated St Laurence from Burbank, 78-50, and Hyde Park defeated Noble Street Charter School (Comer), 68-53.

Previous articleColdest March temp ever in Baltimore on March 4
Next articleOne more N.C. district's board opposes the 25% contract