Near Sacramento, Calif., the San Juan Unified School District says it’s taking a proactive approach with water conservation in response to state water regulators’ demands that schools cut water use by as much as 36 percent next year. 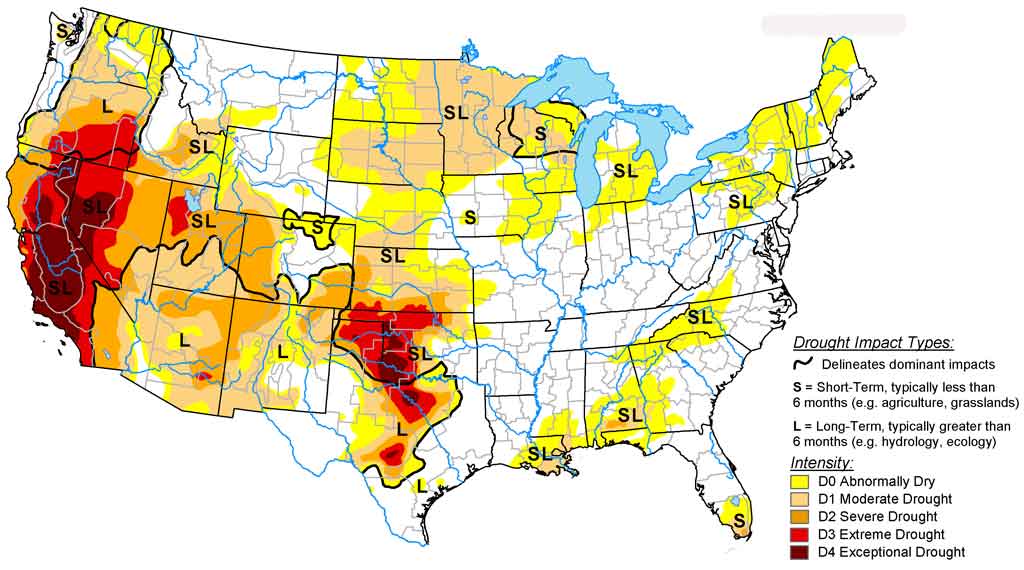 Above: US Drought Monitor, April 14, produced in partnership between the National Drought Mitigation Center at the University of Nebraska-Lincoln, the United States Department of Agriculture, and the National Oceanic and Atmospheric Administration. (Michael Brewer, NCDC/NOAA)

As areas in California enter another summer in drought conditions that are likely to last through the summer and possibly longer, water regulators are demanding that residents and businesses, including schools, conserve water or face a fine. San Juan Unified has set up an email account, savewater@sanjuan.edu, and tip line at (916) 597-0670, for residents to call if they see water waste in the schools.

But in many districts, including San Juan Unified, it’s not clear how much water they can conserve before there’s a negative impact on student safety. When athletic fields aren’t watered, they become dry. Dry ground is often as hard as concrete, and students can’t play soccer, football, softball, etc., on concrete-hard fields with dead grass.

“We have an obligation to provide safe school facilities and a safe environment,” David Burke, director of planning for San Juan Unified, was quoted in the Sacramento Bee as saying. “What we are struggling with is, How do we maintain a safe environment and balance it with the requirement to save 25 to 35 percent of our water?”

By conserving water, primarily through computer-controlled irrigation systems that can sense ground moisture content, the repair of leaky pipes, the use of low-flow toilets, and the general abandonment of ornamental plants and lawns, the water savings could be substantial. The Bee reported that elementary schools use an average of 200,000 to 400,000 gallons of water every week, while high schools use between 1 and 2 million gallons.

Gabe Ross, spokesman for Sacramento City Unified, was quoted as saying the athletic fields “are green right now.” But, “I think it’s safe to say it’s going to be a lot closer to golden this year than it ever has before. … We want our schools to be appealing and we want green spaces for kids to play on, but we have to do it responsibly.”

But if the fields become unsafe, schools that don’t have an artificial turf option would have to cancel games or, possibly, entire seasons if teams can’t find another place to play.

The state’s Water Resources Control Board released a modified set of proposed conservation restrictions on April 18 that would take effect in June, the Los Angeles Times reports.

Some water suppliers will only have to cut their use by 8 percent over last year, while others, including the San Juan Water District, will have to cut its water use by 36 percent. A complete list of water use restrictions proposed by the state can be found here. The goal is to cut water use statewide by 25 percent this year, making it necessary to place greater restrictions on people in some water districts than in others.

“We’re in a drought like we’ve not seen before, so all Californians need to step up,” the Times quoted water board Chairwoman Felicia Marcus as saying. “We know that we don’t know when it will end.”

Doesn’t the water just come back in the water cycle?

You might remember studying the “water cycle” in middle school. The Maryland State Department of Education makes the following clarification:

The water cycle is the movement of water through glaciers, surface water, ground water, oceans and atmosphere. The heat energy from the sun drives the cycle.* When water absorbs enough heat energy it evaporates.

Water evaporates from surface water and from plants through the process of transpiration. Once in the atmosphere, water vapor cools and condenses around dust particles forming liquid water. This process gives off heat warming the atmosphere. As these tiny droplets of water continue to condense they form clouds. When the droplets are large enough, they fall back to the ground as rain, sleet, snow, or hail.

Some of the rain will run off into streams and return to the ocean, but some water will infiltrate into the ground to become groundwater. Snow and ice that falls may remain frozen and form part of the ice caps and glaciers.

(*) Climate change is also making drought more likely in California, even as precipitation increases in other areas of the US, the New York Times reports. To put it simply, if the heat energy from the sun heats up the Earth more (because of the greenhouse gases), more water will evaporate in the water cycle.

“The drought is made of two components: not enough rain and too much heat,” the paper quoted Michael Oppenheimer, a climate scientist at Princeton, as saying. “The rain deficit isn’t clearly connected to climate change, but the planetary warming has made it more likely that the weather would be hotter in California.”