Gov Larry Hogan, Republican of Maryland, decided to put a few million dollars into the state’s pension fund instead of using it to fund the Geographic Cost of Education Index, and that move has brought fire not only from school officials and teachers’ unions but also from Democratic leaders in the General Assembly. 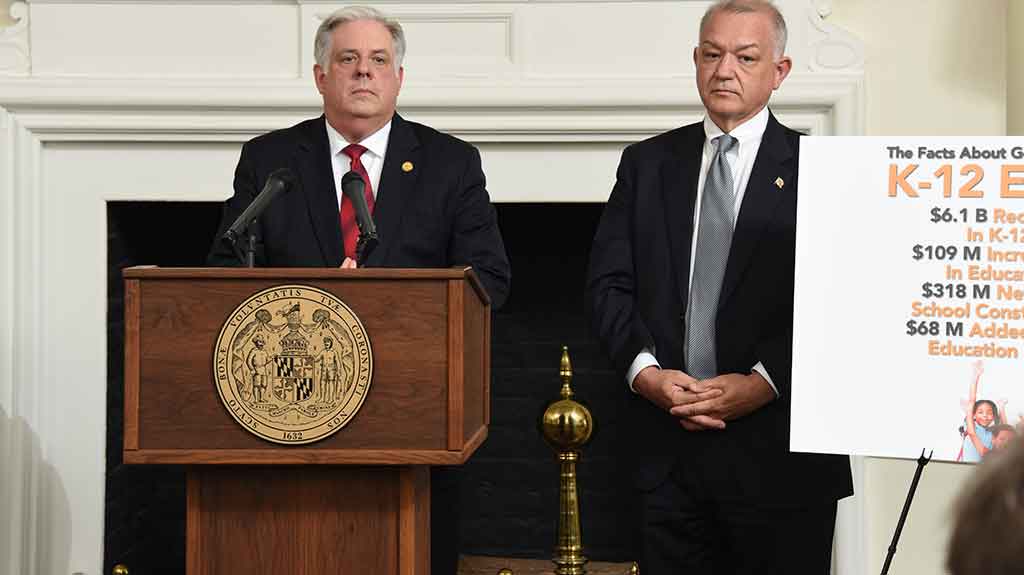 The GCEI provides extra money for public school districts in the state that have higher education costs compared to the taxes those districts would receive from the state. The amount is based on a formula that considers how much the district spends on education and how much funding the state provides. Baltimore City Public Schools, for example, would receive about $11.6 million from the GCEI, and schools in 11 other counties, including at the top Montgomery and Prince George’s, would receive millions as well. The total size of the fund is about $68 million.

But because of what I think was short-term thinking, where legislators wanted money for programs that affect people’s lives now, they have drastically cut the extra money earmarked a few years back for the pension fund. There’s no emergency yet, because retirements won’t need to be paid for several decades, when all current government officials will have moved on, but it’s coming if nothing is done. Here’s a little chart we made from one Mr Hogan used at a meeting with reporters last week showing the cuts that have been made in the extra pension money in recent years. Instead of $300 million for FY 2016, for example, legislators passed a budget that spends only $75 million on the pension fund. 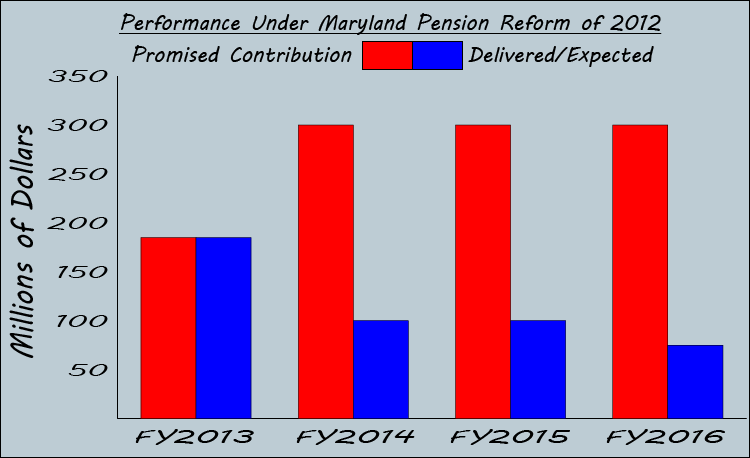 Using the $68 million that was supposed to be extra money for schools that have a tough time paying their bills, already earmarked when the General Assembly passed this year’s budget, and shoring up the pension fund with extra money beyond the mandated payments is a sign of fiscal responsibility and good stewardship. Putting off the pension funding will get our children into trouble down the road when they’ll have to pay retirees from a fund that’s too low.

Illinois just had this battle, and while Illinois’s pension funds are in much worse shape, the state Supreme Court found it unconstitutional for the government to change the amount of retirement benefits promised to retirees just because the pension fund didn’t have enough money to pay for those benefits. Governors and legislators there had been using short-term thinking and shorting the pension fund for several decades.

Marylanders at least have a grip on what needs to happen before an emergency and the threat of non-payment come home to roost. But if the fund continues to be underfunded, the same situation would happen in Maryland a decade or two hence.

There is some question, however, over whether Mr Hogan has the authority to divert the GCEI money to the pension fund this year after the General Assembly has already passed the budget. Here’s what Barry Rascovar on Maryland Reporter.com writes about it:

Hogan’s pension purity pursuit was his way of diverting attention from his other action—denying important state dollars to Baltimore City and other high-cost subdivisions to help them avoid layoffs or cuts in school programs.

He said it would be “absolutely irresponsible” to give that money to the schools instead of pouring it into the pension fund. He’s got his priorities reversed. The greatest immediate urgency is bolstering education achievement in distressed communities like West Baltimore. That takes money.

Further fortifying the state’s pension program can be done more gradually over the next decade or two.

There are fights down the road. Reducing the funding of today’s needs like the schools to provide for retirees 20 or more years from now may make Democrats bitter and unwilling to bring a bipartisan spirit to the table as they work on some of Mr Hogan’s other priorities in the future.

But the state’s new governor is wise and forward-thinking, I believe, to try to avoid the disasters an underfunded pension fund would create for our children down the road. When people go to work for the state, they do so because they receive certain promises. They forego higher salaries they could earn in private industry and work for the government to make people’s lives better. We need good state workers, and the recent disaster in Illinois—which is ongoing thanks to the state Supreme Court—should make all governors realize the importance of maintaining proper levels of pension funding, just as Mr O’Malley did in 2012.

Schools need to give on this one and find ways to cut spending by the small amount they would receive from the extra GCEI funds so the state can keep a promise it made several years ago by providing extra money for the pension fund this year. Where are all those wasteful spending methods Mr Hogan “discovered” during the campaign?

Can DeVos and privatization be stopped?