Fewer than 1 in 5 middle and high schools in the US began the school day at the recommended 8:30 AM start time or later during the 2011-2012 school year, according to data published today in the Centers for Disease Control and Prevention’s Morbidity and Mortality Weekly Report. Too-early start times can keep students from getting the sleep they need for health, safety, and academic success, according to the American Academy of Pediatrics. 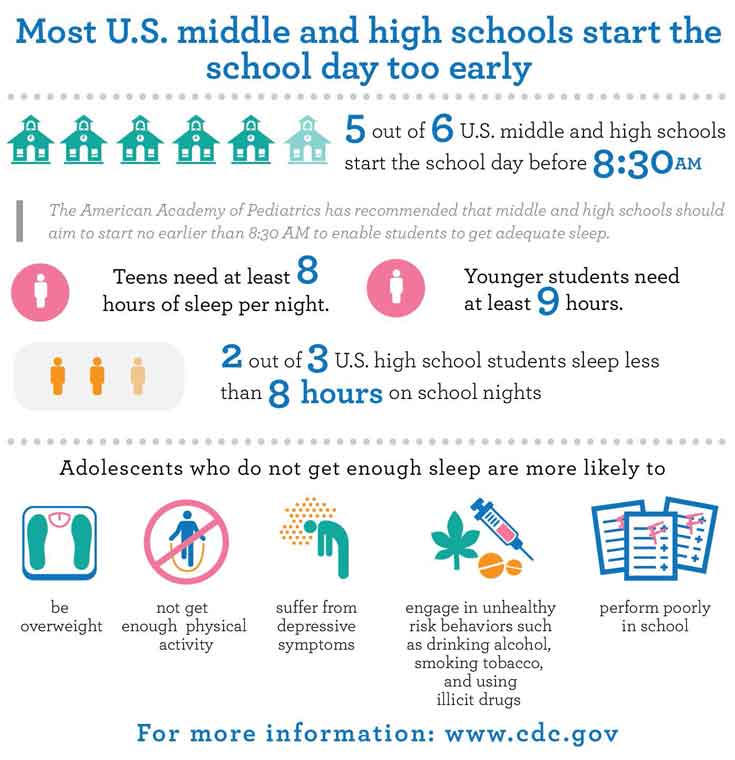 The CDC’s report is based on data collected from public schools—about 40,000 of them—through the National Center for Education Statistics and the center’s 2011-2012 Schools and Staffing Survey, as well as the 2013 Youth Risk Behavior Surveillance Report.

Voxitatis has also issued several reports about school start times (see the list here), calling on high schools to begin the school day no earlier than 8:30 AM. We have commented so much about it that saying more almost belabors the point, and we won’t do that. We can only add that a report last year from the Education Commission of the States said:

There is virtually unanimous agreement in the research community that later start times in adolescent education would produce a positive change in adolescent learning, health and safety.

Other research has been published and stands on the record, longer than a decade, but schools continue to resist adjusting start times to after 8:30, citing some potential increase in transportation expenditures or the need students have to work several hours after school or participate in extracurricular activities.

None of these reasons can hold much water with us, mainly because they seem false—or at least easily addressed and solved with just a small measure of creativity. Districts continue to make these arguments, though, and disregard research that clearly shows how starting school too early is depriving adolescents of much-needed sleep. We once again call on high schools to adjust their schedules to start the school day no earlier than 8:30.

Previous articleNumber of football home games to be played
Next articleJunior Seau, others inducted into NFL Hall of Fame

Howard Co. rescinds policy to start school after 8 AM