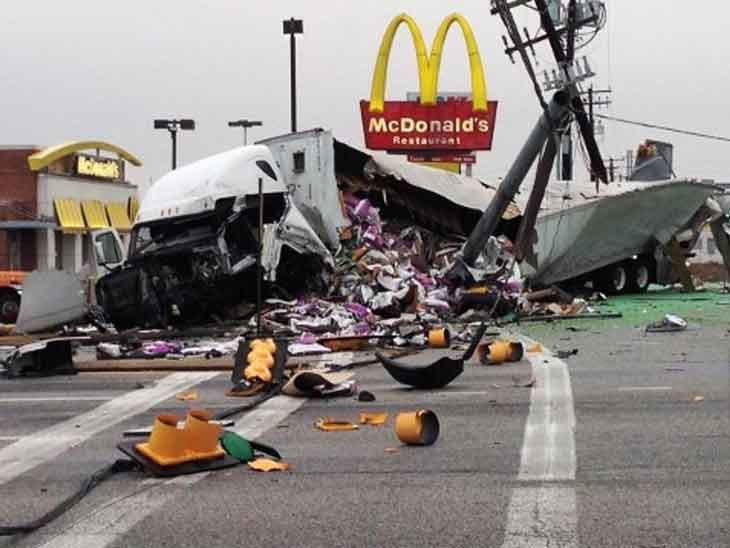 Two tractor trailers and other vehicles were involved in an accident with injuries, utility pole and traffic signal destruction, and fuel spillage in East Lampeter Township, Pa., on Dec 4. (WGAL NBC News Channel 8, Lancaster via Flickr)

I’d be willing to bet that every math teacher in America has been asked, by more than a few students, When are we ever going to use this?

Given the wide range of possible directions their students’ lives may take, teachers often tap dance, wave their arms in the air, and squirt out a general answer that leaves their students completely unsatisfied.

But with a little help from community members, who are actually using math in their jobs, some teachers have found ways to answer the question and get students to learn some mathematics in the process of applying it in the real world.

“The reason I like doing this is because when I was in high school and college, and I sat in math classes like you guys, I really didn’t care about it at all,” the paper quoted Officer Nelson as saying.

“Because, when am I going to use calculus, trigonometry, and geometry? Never. And then I get into this career and decide I like doing accidents … and use a lot of math.”

If a car left an asphalt roadway, crossed a dirt median, and then ramped up onto another asphalt roadway covered with brake fluid, how might you determine the minimum speed at which the vehicle was traveling before it initially skidded off the original roadway? See the Next Generation Science Standards for high school (forces and interactions), here, for more information.

Modeling a food web with math

After some trigonometry, horses get their hay

Urschel: We can bring math into kids’ real lives