Preliminary research about charter schools by an associate professor in the Education Leadership Department at Penn State University says that high-performing charter schools in Texas cater to a population of students that is easier to teach. As opposed to what media reports often suggest, the high levels of achievement shown by charter schools may be more closely tied to the students’ ability before entering the school than it is to the quality of the school itself. 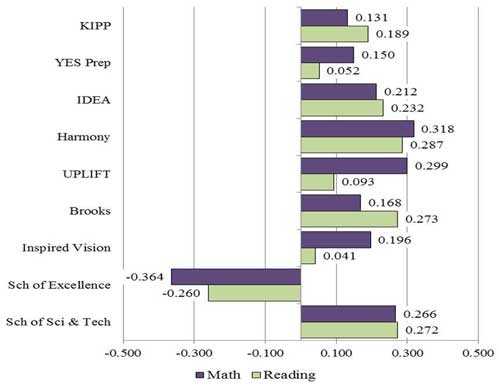 Professor Ed Fuller published the preliminary report on his blog. Note that this entry has not gone through the usual academic review process, but the data reported seem to support Dr Fuller’s conclusions.

That is, as the data show in the graph above, for example, students who entered most of the middle school charter schools—all but the School of Excellence, that is—had scores on the TAKS test in sixth grade, for both math and reading, that were significantly better than the scores on the TAKS for students who did not gain admission to the charter programs.

This study is a preliminary examination of high-profile/high-performing charter management organizations in Texas. Specifically, the study examined the characteristics of students entering the schools, retention/attrition rates; and the impact of attrition/retention rates on the distribution of students.

Contrary to the profile often portrayed in the media, by some policymakers, and by some charter school proponents (including some charter CEOs), the high-profile/high-enrollment CMOs [charter management organizations] in Texas enrolled groups of students that would arguably be easier to teach and would be more likely to exhibit high levels of achievement and greater growth on state achievement tests. . . .

In other words, rather than serving more disadvantaged students, the findings of this study suggest that the high-profile/high-enrollment CMOs actually served a more advantaged clientele relative to comparison schools — especially as compared to schools in the same zip code as the CMO schools. This is often referred to as the “skimming” of more advantaged students from other schools. While CMOs may not intentionally skim, the skimming of students may simply be an artifact of the policies and procedures surrounding entrance into these CMOs.