Steve Doner, the former Illinois chapter coordinator for the National Motorists Association, writes an op-ed in the Daily Herald suggesting that keeping the speed limit at 55 mph on the Illinois Tollway system makes travel dangerous, especially for teenagers fresh out of driver’s education classes where they are taught to obey the law to the letter. 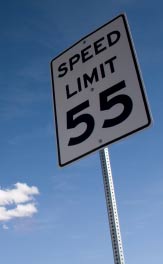 He quotes an Institute of Transportation Engineers report to explain why the speed limit should be higher on I-294, I-80, and I-88 near Chicago:

Drivers traveling significantly faster or slower than the 85th percentile speed (the speed below which 85 percent of cars travel when not impeded by traffic or the presence of law enforcement) are at a greater risk of being in a crash.

He then says he clocked 521 cars one day at various locations on the tollway, calculating the 85th-percentile speed at about 72 mph. In other words, 85 percent of all drivers were traveling slower than 72 mph. Furthermore, he said, only 4 percent of drivers were in compliance with the 55-mph speed limit, and many of the drivers who were within the limit were teenagers, posing a great danger to themselves and other drivers as moving road blocks.

I couldn’t agree more! I don’t like to speed and I constantly watch the speedometer when I drive, but doing so is downright impossible on the Illinois tollway. People drive around and then cut in front of you if you’re driving under 70, and the feeling is unsafe. Time to look at the limit on the tollway.

I just came back from a vacation that included Utah, where the speed limit on I-15 is, in some stretches, 80 mph. Nobody was speeding or traveling much slower than the 80-mph limit, in my experience. On the Illinois tollway, everybody breaks the law. People who want to abide by the law have to break it just to stay alive.

The primary people affected are kids, who are taught in their driver’s ed classes to stay within the speed limit. We’re actually instructing them to drive unsafely, and it’s not right.

After some trigonometry, horses get their hay