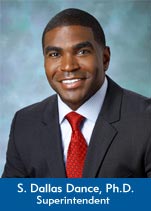 The Baltimore County school board ethics panel ruled on May 12 that Superintendent Dallas Dance violated the board’s rules by taking a consulting job with a professional development company that does business with the school system, the Baltimore Sun reports.

Mr Dance has agreed not to take any more consulting jobs while he’s employed as superintendent of the Baltimore County Public Schools, and he also said in a statement that he would be more careful in the future to avoid conflicts.

“I acknowledge that better professional judgment should have been exercised in the SUPES Academy situation that occurred earlier in the school year,” the Sun quoted Mr Dance as saying in a statement. “I didn’t recognize it at the time, but I realize that the relationship indeed creates a conflict. … I will definitely be more sensitive to the importance of avoiding situations that create conflicts, or even the appearance of a conflict, and will be more careful in the future.”

The report detailing the rules violations is not expected to be released to the public, since the board considers it a personnel matter and therefore not subject to records requests.

Balto. Co. goes the other way on teen sleep