A law went into effect on July 1 in Georgia that makes it illegal to bring an unauthorized gun onto school grounds. One man has filed a lawsuit saying that since he’s a “licensed” gun owner and he believes the new law applies only to unauthorized guns, he should be allowed to carry his weapon while he’s dropping off his daughter at an elementary school, the Atlanta Journal-Constitution reports. 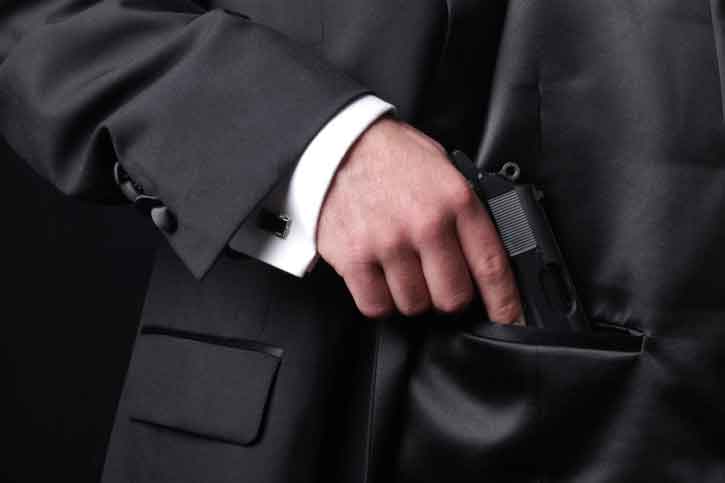 The suit, filed in May, says when Hugh Meyers comes to the school to support his daughter’s education, “he desires to carry a firearm in case of confrontation, as the law now permits. He would do so, however, under threat of arrest and prosecution.” That’s the case because school officials have told him he would be arrested if he brings his gun onto school grounds.

Mr Meyers asked the judge last month to grant a temporary injunction allowing him to carry his gun on the grounds of Beulah Elementary School in Douglas County until his lawsuit is resolved.

The Journal-Constitution was unable to reach school officials for comment.

The paper did, however, quote from Mr Meyers’s brief filed in the case: “Now that it no longer is a state crime for a (licensed gun) holder to carry a firearm in schools, and that schools cannot independently regulate carrying weapons, including firearms, there simply is no basis for (school officials) to threaten … prosecution if he carries a firearm at Beulah.”

We call on Georgia lawmakers to revise this law. It should be a crime for anyone except a sworn law enforcement officer to bring a gun, or any weapon, onto school grounds. An elementary school is not likely to threaten the safety of Mr Meyers, and we cannot guarantee the safekeeping of his firearm while he’s at the school. The technicality of making it legal for licensed gun owners to carry a gun at the school is really a loophole, and it needs to be closed.

A Michigan law allows people who have concealed-carry licenses to bring their guns onto school grounds, but they aren’t allowed to conceal their weapons while they’re at the school, WZZM (ABC affiliate) reports.

A school board in Texas, in a remote part of the state at least 30 minutes from the nearest sheriff’s office, approved a motion to allow teachers with concealed-carry permits to bring their guns to school, the New Orleans Times-Picayune reports. “We don’t have money for a security guard, but this is a better solution,” the paper quoted Superintendent David Thweatt of Harrold as saying. “A shooter could take out a guard or officer with a visible, holstered weapon, but our teachers have master’s degrees, are older and have had extensive training. And their guns are hidden. We can protect our children.”

Should licensed gun owners be allowed to bring their weapons into a school or onto school grounds?

Previous articleACL in knee gets special care in girls' sports
Next articleSymbiosis of 4, not 3