Suspensions down in Chi-town

Two pieces of news out of Illinois would seem to offer conflicting accounts about suspensions, expulsions, sending kids to alternative schools for disciplinary reasons, and so on.

On the one hand, a report from the University of Chicago Consortium on Chicago School Research finds that Chicago Public Schools have been removing fewer students from school as punishment for misbehavior in recent years, but the practice is still done frequently, especially for kids in certain categories and for nonviolent offenses.

The authors write, “While administrators we interviewed recognized fights as a primary concern in their schools, 27 percent of out-of-school and 7 percent of in-school suspensions in high school are for physical conflict or threats to safety, meaning most suspensions result from conflicts that involve no physical harm.” They go on to suggest a need for increased training of school officials in the de-escalation of conflicts so that taking kids out of school isn’t necessary in order to get control of the situation.

And on the other hand, two prominent school professional associations in Illinois, including the Illinois Association of School Boards, have emailed their members, urgently requesting they contact state lawmakers and ask them to oppose a bill that’s now in the state Senate, proposed legislation (Senate Bill 100) that would seem to reduce the number of times kids are excluded from their normal school environment for disciplinary reasons.

The Illinois Principals Association writes, “If enacted, this bill would potentially:

The bottom line, in my legal-minded view—and I don’t often find myself taking a legal mind to anything—is that out-of-school suspensions are like abortion: Fairness and the rights of certain individuals make it impossible to legislate them out of existence, but everybody wants the numbers to go down. That is, with abortions, almost everybody agrees special circumstances exist in which terminating a pregnancy is in the best interest of the child, the family, and life in general. Nobody’s saying the fetus isn’t a person or that killing it is a good thing; they’re concluding that an abortion would be the right thing to do.

Several politicians, even the most conservative ones, have accepted abortion in limited circumstances. “I don’t believe they should advocate abortion with my tax dollars,” Sen John McCain, Republican of Arizona, said in 2000, adding that he opposed abortion except in cases of rape and incest.

And even many of the most liberal politicians, who are generally in favor of allowing abortions to go forward, don’t want the numbers to be high. “I think abortion should remain legal, but it needs to be safe and rare,” Hillary Clinton said at a 2008 forum at Messiah College. “And I have spent many years now, as a private citizen, as first lady, and now as senator, trying to make it rare, trying to create the conditions where women had other choices.”

Zero-tolerance policies for school offenses, which SB 100 tries to legislate away, are bad because they’re absolute. They give administrators no wiggle room to adjust the punishment for special circumstances, as even Mr McCain would allow for abortion.

In other words, an automatic expulsion or out-of-school suspension can right now be imposed by a school district for certain offenses under zero tolerance. SB 100 would take that right away from school boards and force principals to consider other punishment options, thus ending zero tolerance. But, by “restricting the use of suspensions, expulsions, and the ability to move students to an alternative setting,” the Illinois Principals Association wrote, the bill would “significantly (limit) a school district’s ability to maintain an emotionally and physically safe learning environment.”

Zero-tolerance policies in our schools get much less coverage in the media, but school officials and legislators across the country are taking them to the mat.

In 2009, Delaware amended its zero-tolerance provision to give discretion to school boards to modify the terms of expulsions when a school board determines that it is appropriate to do so.

Colorado took the same step in 2011, enacting a law that provides for mandatory expulsion if a student has a firearm at school, in accordance with federal law. School districts there are encouraged to consider extenuating circumstances for all other offenses before suspending or expelling a student. They are directed in the bill to use prevention, intervention, restorative justice, peer mediation, counseling, and other approaches to address student misconduct.

In January 2014, the Maryland State Board of Education approved sweeping changes to the state’s discipline policies, hoping to make student punishment more constructive and end racial disparities in suspensions. They also hoped to keep students who are punished in school, given that learning of school subjects, on which students are tested, can’t occur if students aren’t in school. Principals in Maryland can still suspend students, but the philosophy is one that encourages rehabilitation instead of mandating exclusion. The rules also force schools to provide certain supports for suspended students.

End disparity in the use of out-of-school suspensions

The Chicago consortium report shows a correlation between a kid’s chances of being taken out of school as punishment and his or her disability status, sex, age, race, and academic performance, none of which have any connection to the misconduct or the actual offense the kid committed. More high school students who score in the lowest quartile on academic tests, for instance, receive out-of-school suspensions than those who score in the highest quartile: 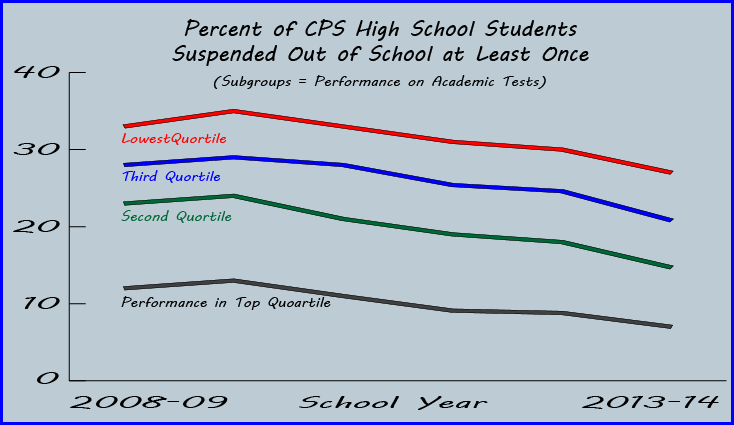 Of course, correlation doesn’t imply causation, so I can’t say kids are more likely to get an out-of-school suspension if they’re black than if they’re white for the same offense, but the disparity in the numbers is worth looking into. And so, the consortium looked into it, as did the above-mentioned states in passing laws.

In February 2014, the Chicago Public Schools released the Suspensions and Expulsions Reduction Plan in order to reduce the use of exclusionary disciplinary practices in schools. Out-of-school suspensions are down, but much work still remains in Chicago and in other districts hoping to develop more constructive student discipline policies. For example, districts might develop policies that:

But SB 100 carries with it mandates and controls on what school officials can and can’t do in certain situations. Without amendment, we stand opposed to SB 100. We fundamentally believe punishment for crimes should rest with the legislature while punishment for school misconduct should rest with school officials. We therefore urge state senators to vote No on legislation like this until a proper bill, which helps reduce out-of-school suspensions, comes to Illinois.

Woman says teachers locked her son in a closet