“Drug addiction does not set boundaries anymore, and children are more likely one of its victims,” wrote Lauren Moore in an email. She’s on the creative team at Project Know, an arm of California-based Recovery Brands, which assists addicts and their families nationwide in the recovery process. The organization’s recent report, “A Decade of Drug Use by High School Students,” looked at substance abuse by US teenagers since 2003, using data from the Centers for Disease Control and the University of Michigan’s Monitoring the Future project. 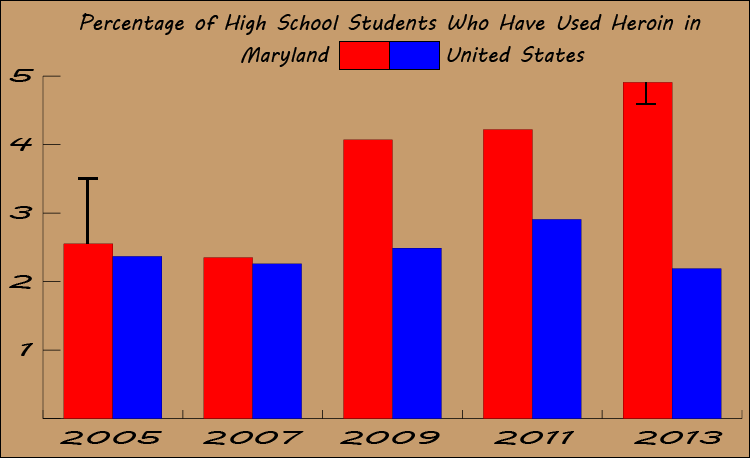 Based on the CDC’s data from the Youth Risk Behavior Survey, the percentage of high school students in the US who have ever used heroin didn’t change significantly from 2005 to 2013. However, the percentage of high school students in Maryland who have ever used the drug nearly doubled over that period, going from 2.55 percent in 2005 to 4.91 percent in 2013, representing a statistically significant increase in heroin use at the 95 percent confidence level.

The biggest increase in reported lifetime use of heroin among Maryland high school students occurred between 2007 and 2009. The eight-year increasing trend of abuse in the state, though, compared with national trends, supports comments heard at a recent Heroin and Opioid Emergency Task Force hearing, a panel convened by Lt Gov Boyd Rutherford aiming to understand and, the new governor hopes, make a dent in Maryland’s heroin problem.

“It’s not unusual to hear that they and a friend or two took medications from their parents’ medicine cabinets or shared drugs brought to school or to a party, having no idea what they were taking,” the Baltimore Sun quoted Charlotte Meck, a nurse at Father Martin’s Ashley, as saying. “Most never thought those pills would lead to heroin use.”

Heroin use by gender in Maryland

Heroin use by boys went up significantly from 2.79 percent in 2005 to 6.29 percent in 2013, while that for girls went up slightly, from 2.32 percent to 2.81 percent over the same period, though the increase was not statistically significant.

Heroin use by grade level in Maryland

The increases in heroin use from 2005 to 2013 were considered statistically significant for all grade levels except 12th, which decreased slightly.

Heroin use by race/ethnicity in Maryland

Sample sizes were too small to determine an increase or decrease in heroin use by race or ethnicity. However, data were sufficient to identify trends for both white and black students. Briefly, black high school students in Maryland used heroin at significantly higher rates in 2013 than they did in 2005, while white high school students in the state showed a slight, but statistically insignificant, increase in heroin use over the same period.

Teens exposed to drugs more likely to abuse in 20s