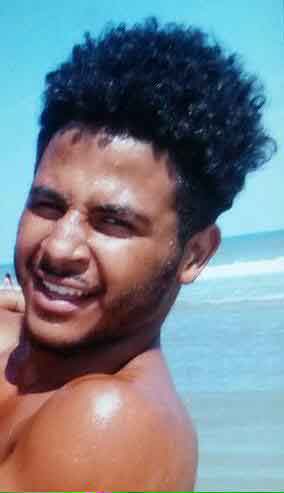 Police in Jacksonville, Fla., are searching for a 16-year-old gunman who they say fired shots from the street into a school bus filled with children yesterday, wounding two girls, the Florida Times-Union reports.

Edgar Robles, 16, pictured at right, has been charged in arrest warrants with two counts of attempted murder and one count of throwing a deadly missile. As of 7 PM Friday, he is still at large somewhere in Jacksonville, police believe. They’re seeking the public’s help in locating him and his two alleged companions.

“His blatant disregard for life and his reckless behavior with dire, unintended consequences is shocking and alarming to myself,” the paper quoted Jacksonville Sheriff’s Office Director Tom Hackney as saying.

The two girls were reported to be 16 years old. One suffered a gunshot would through both cheeks, and the other was hit in the back of the head. They were rushed into surgery at the University of Florida Health Center in Jacksonville shortly after the bus driver brought the school bus to a stop and called 911. The girls did not have life-threatening injuries and were said to be in fair condition Friday afternoon.

Superintendent Nikolai Vitti was quoted on WJXT-TV News-4 as saying he was “horrified” and “sickened” when he first heard of the shooting.

“When we think of a school bus, it symbolizes the innocence of youth,” the station quoted him as saying. “To think that our own children in Jacksonville cannot ride a school bus home without something this horrific happening is another example that violence is run rampant in our community in Jacksonville. It’s time we have to do something.

“As a community we have to start providing for [students’] need to be safe. They were completely innocent bystanders in this situation. It’s just cowardly to shoot at a school bus when children are trapped inside the vehicle.”

Jacksonville schools were open Friday, but police tactical units escorted buses on their routes to the three schools connected to the shooting, extra police officers were placed in those schools, and grief counselors were on hand.

Gun in a Naperville school, manhunt in Plainfield