The following constructed response question, explained here in hopes of helping fifth-grade students and their parents in Maryland and Illinois prepare for the PARCC test near the end of this school year, appears on the released version of PARCC’s Spring 2015 “PBA” (performance-based assessment) for grade 5 math:

Joshua planted carrots and peas in his garden. 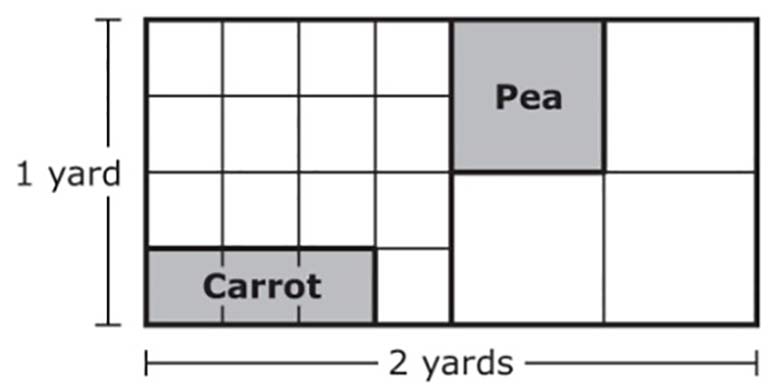 What color do you think the carrots were in Joshua’s garden?
Answer and references

Solve multi-step contextual word problems with degree of difficulty appropriate to Grade 5, requiring application of knowledge and skills articulated in Type I, Sub-Claim A Evidence Statements.

The evidence statement above references Math Practice 4 in the Common Core: Model with mathematics.

Mathematically proficient students can apply the mathematics they know to solve problems arising in everyday life, society, and the workplace. In early grades, this might be as simple as writing an addition equation to describe a situation. In middle grades, a student might apply proportional reasoning to plan a school event or analyze a problem in the community. By high school, a student might use geometry to solve a design problem or use a function to describe how one quantity of interest depends on another. Mathematically proficient students who can apply what they know are comfortable making assumptions and approximations to simplify a complicated situation, realizing that these may need revision later. They are able to identify important quantities in a practical situation and map their relationships using such tools as diagrams, two-way tables, graphs, flowcharts and formulas. They can analyze those relationships mathematically to draw conclusions. They routinely interpret their mathematical results in the context of the situation and reflect on whether the results make sense, possibly improving the model if it has not served its purpose.

The evidence statement requires students to apply knowledge of mathematics in real-world problems appropriate to Grade 5 math standards in the Common Core, including standard 5.NF.A.2, which says students should be able to

Solve word problems involving addition and subtraction of fractions referring to the same whole, including cases of unlike denominators, e.g., by using visual fraction models or equations to represent the problem. Use benchmark fractions and number sense of fractions to estimate mentally and assess the reasonableness of answers. For example, recognize an incorrect result 2/5 + 1/2 = 3/7, by observing that 3/7 < 1/2.

or 5.NF.B.4.A, which says students should be able to

Example solution strategy (there are others)

Because the left side of the garden measures 1 yard and it’s divided into 4 equal sections, the length of each section is 9 inches, and each little square represents 9 × 9 = 81 square inches in area in the model as drawn. Since the carrot section has 3 little squares, its area, represented by C, is

I am asked how much bigger the pea section is than the carrot section, which means I have to subtract C from P to find the answer:

Analysis of this question and online accessibility

Students don’t need knowledge of substantial aspects of the math standards in the Grade 5, Number & Operations—Fractions section of the Common Core to solve the problem, unless they decide to use fractions, which isn’t the only approach. Because knowledge of those specific fifth-grade standards isn’t necessary to solve the problem as given—see my sample solution, which doesn’t have a fraction anywhere in sight—and because knowledge of the standards must be both necessary and sufficient to address the question if we’re claiming the question is aligned to the learning standard, this question is largely out of alignment with the Common Core.

As a result, a parent or teacher can base no useful conclusions about how well students understand modeling with fractions, which is what the evidence statement says this question measures, on any data that includes scores on this question.

The question can be delivered online and would yield performance statistics that are as valid as those obtained from paper-and-pencil test-takers. However, online test-takers may have difficulty with the equation editor, and if they have such difficulty, they may not be able to type in all the logic and reasoning needed to receive full credit (3 points) for this question.

I remind students, as I have in the past, when the equation editor pops up for a question, take a little extra time to make sure you:

No special accommodation challenges can be identified with this question, so the question is considered fair.

Rachel Weill and her husband, David Levitt, in San Anselmo, California, have two children, one 11- and the other 7-years-old. When those kids get home from school, they can’t wait to get fresh vegetables and fruit from the garden they’ve planted in their own backyard, Sunset reports.

“They constantly bring in food at random times, wanting to make a salad,” Ms Weill says. “And when they have friends over, they like to show off the garden.”

Among the veggies she recommends planting are carrots and snap peas, just like Joshua in the math problem here.

She hired a contractor to build four raised beds of untreated redwood into the hillside and secured those boxes with long bolts. Then she anchored the beds to the ground with cement. She grew the carrots from seed, and everything else was started in a nursery, she said.