Schools in both our home states, Maryland and Illinois, are joining a nationwide drive, stepping up efforts in a massive way, to send help to hurricane victims in Texas and Florida. Reports are simply too numerous to list on these pages, so we focus on a few.

“We must support all children and heal each other in times of crisis,” Bethesda Magazine quoted Montgomery County Public Schools Superintendent Jack Smith as saying in a prepared statement.

The suburban Washington district, Maryland’s largest, hopes to raise more than $160,000 for hurricane relief efforts. The campaign in Montgomery County will continue through October 2, according to a press release. 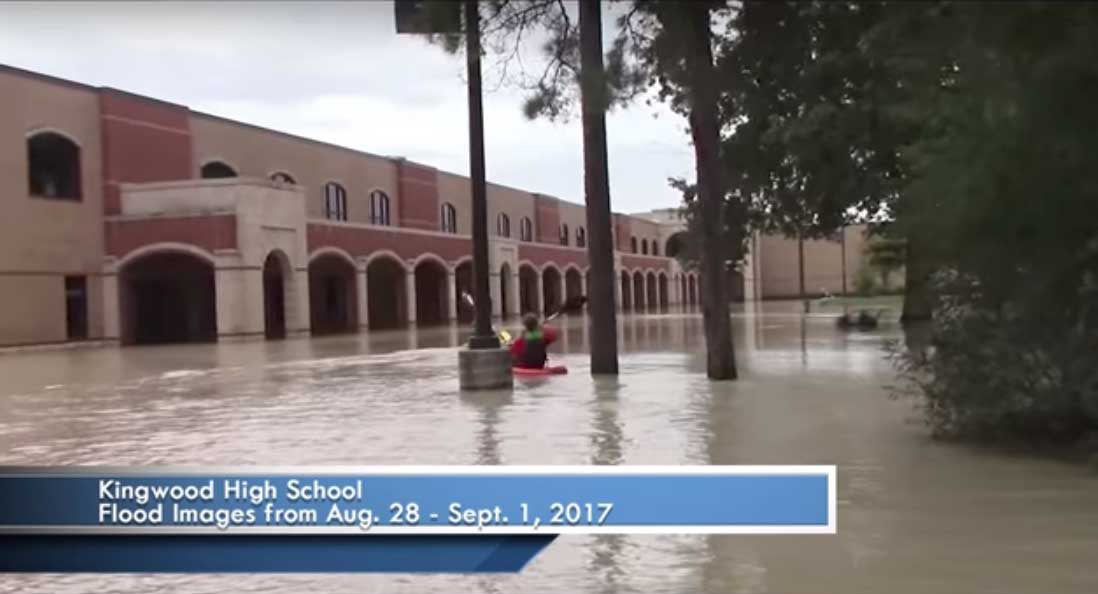 In Illinois, the marching band from Warren Township High School in Gurnee, in Chicago’s northern suburbs, will continue its annual tradition of having middle school students in local feeder districts join the band on the field for a free show at 7 PM Wednesday, September 13.

There’s no charge for admission but all donations received will be sent, by the directors from the two middle schools and Warren Township, to the high school band program in Kingwood, Texas.

More than five feet of water filled Kingwood High School and reached the second floor of the building. The music wing, which is on the first floor, suffered the most damage. Due to all the flooding and damage, Kingwood students are being bused to another high school in that district for their education this year. It’s one of many schools in Texas that have had to close for the long term, either to be repaired or condemned.

Carolyn Awe, a band director at Woodland Middle School in Woodland Community Consolidated School District 50, raised awareness about the losses, as she has family ties to Kingwood. So tomorrow, that district’s Middle School Marching Wildcats and the Viking Middle School band from Gurnee District 56 will join the Warren Township Marching Blue Devils.

The show is set to take place at the Warren Township football stadium, 500 N O’Plaine Road, Gurnee. Past beneficiaries of these shows have been the victims of Hurricane Katrina, the American Red Cross, various cancer societies, the Iowa Flood Relief Fund, the Warren Food Pantry, and animal shelters. Any checks dropped into big drums used for the collection should be made out to Warren Band Boosters.

“We try to instill in our band students here in Gurnee that band is family,” said Elise Matusek, also a band director at Woodland Middle School in District 50. “Whether it’s in our own schools, across town, across the state, or across the country, band is one huge family. Please show the Kingwood, Texas, band family we are here to help.”

Finally, in the “creative ways to help” category, we find a report from the student newspaper at Coronado High School in Colorado Springs, Colorado.

“Supplies are still badly in need, and the property damaged will take years to be restored or replaced, if they ever do,” writes Tiffany Jacquez in The Cougar Daily.

She reports that Jill Haffley, one of the teachers at the school, started the Sock It To 'Em Sock Campaign last week and is running it through September 29. Students have been encouraged to bring in socks for the school to send to victims of Hurricane Harvey in and around Houston.

“Socks of all sizes are welcomed, but black socks are discouraged because the fabric’s dye bleeds onto the skin when wet,” the report says. The campaign is a “small way for you as a student at Coronado to help out the massive effort to aid the victims of Hurricane Harvey.”