A game of Zingo! in algebra I at Alton HS

I visited Tim Young’s freshman algebra class in October, and, because of an illness, I’m just now getting a chance to pass on a fun game he played with his students to get them comfortable manipulating numbers and operational symbols in numerical expressions. The game is known, by Mr Young’s class at Alton High School in Alton, Ill., as Zingo! 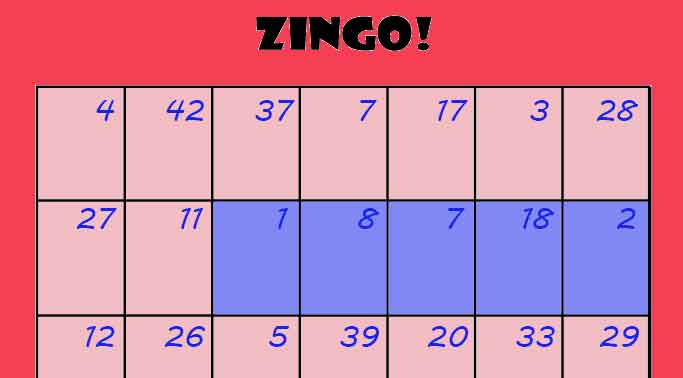 Instructions for the teacher

You can make up other little rules, such as not using consecutive minus signs, not using radicals, as in cube roots or square roots, and so on.

But be careful not to make things too complicated. The object here is to increase students’ comfort level when it comes to manipulating numerical expressions, not to make them remember a whole bunch of rules.

When I played along in class, I had five in a row on the second row of my card. I wrote the numbers 1, 8, 7, 18, and 2 in those five rectangles, and here’s how I filled in the expressions:

This game isn’t technically algebra, since it doesn’t involve variables. But the algebraic thinking, moving numbers and mathematical operations around, is certainly pre-algebra. As such, it’s clear Mr Young was refreshing his “freshman algebra” students on some seventh- and eighth-grade skills early in the school year.

Common Core math standard 7.EE.B.3, for example, says students should be able to “Apply properties of operations to calculate with numbers in any form; convert between forms as appropriate …” That applies here as students change the form of expressions to match the contents of the rectangles on the Zingo! card.

These days, many advanced kids take algebra I in eighth grade. But Mr Young’s class that October morning held about 25 freshmen who were not in that category and were being led, ably, by a teacher who knew they had to learn how to walk before they could run.

We extend our sincere thanks to Alton High School and to Ms Annice Brave, a National Board Certified Teacher and Illinois’s 2011 Teacher of the Year, for their kind hospitality in allowing us to develop this story.

Principal Appreciation Day in the Land of Lincoln