Black America 'in a state of emergency'

People in the rural northeast and south could have attitudes that are more racist than people have in the rest of the country, the journal PLoS One reports. 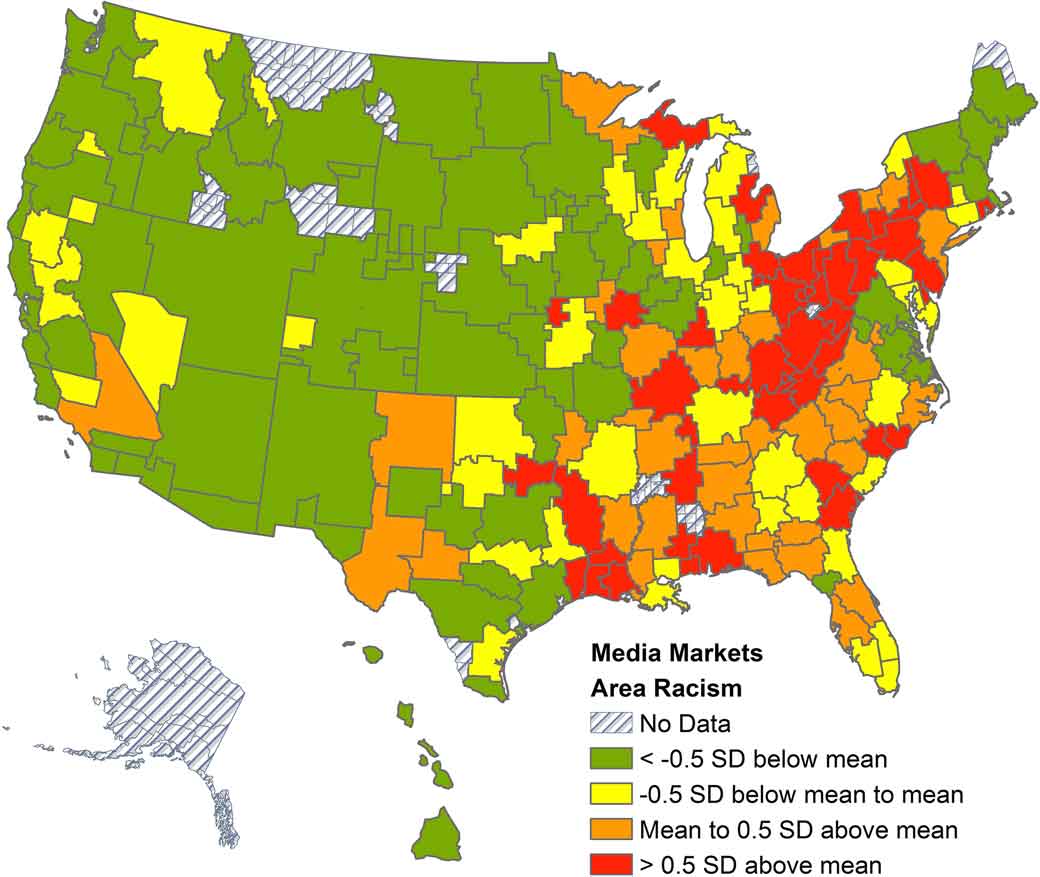 In order to get a glimpse at people’s attitudes about race, data scientist Seth Stephens-Davidowitz came up with the method of examining Google search data. He explained this methodology in a previous paper entitled “The cost of racial animus on a black candidate: Evidence using Google search data” in the Journal of Public Economics (118:26–40, 2014).

In the present study, researchers from Harvard and Google analyzed how many Google searches executed from 2004 to 2007 contained the N-word from different US media markets.

Surveys of data like this can produce something akin to poll results, though. I frequently research articles by searching Google for opinions that are very different from my own. I might have even included the N-word in a search or two over the past four years, I don’t know.

But some researchers think searches like mine fall into the “noise” and the “signal” that remains comes from people who are searching for Web documents with ideas that closely parallel their own. “Google data, evidence suggests, are unlikely to suffer from major social censoring,” Mr Stephens-Davidowitz wrote. “Google searchers are online and likely alone, both of which make it easier to express socially taboo thoughts. Individuals, indeed, note that they are unusually forthcoming with Google.”

What the current research analysis has shown, using a methodology that may or may not be valid, is that mortality rates for blacks went up as the racism level, as measured by Google searches, went up. Researchers even controlled for age, sex, and year of death, and they adjusted the rate based on black-white disparities in the mortality rates for the area.

In terms of specific causes, researchers found that racism was positively correlated with black mortality rates for heart disease, cancer, and stroke.

Racism in America has a “deleterious impact” on “health among blacks,” the authors write. “Our study contributes to evidence that racism shapes patterns in mortality and generates racial disparities in health.”

And mortality rates, of course, aren’t the only black-white disparities that always seem to go hand in hand with expressions of racism.

With the people in Charleston and those at two colleges in the area, we mourn the loss of nine people of color and great faith, as widely reported.

With the people of the Gresham-Barlow School District in Oregon, or at least with one school board member, we question the spending of about $100,000 annually for teacher and administrator professional development at a conference that allegedly gives teachers the hopeless message that all white people are racist.

With the people of Texas, we applaud the recent decision in the Supreme Court to allow the state to refuse to display the Confederate flag on vehicle license plates.

With federal lawmakers who met in Baltimore on June 23, we call for a renewed effort to eliminate poverty and address the underlying issues that contributed to the death of Freddie Gray and caused the subsequent riots: racism, lack of economic opportunity and disparities in education, as reported in the Baltimore Sun.

“The death of Freddie Gray turned the nation’s eyes to the city,” the paper quoted US Rep Elijah E Cummings, who helped organize the forum at the University of Baltimore, as saying. “We cannot let the nation’s gaze turn away [without addressing those deeper issues].”

“Black America is in a state of emergency,” US Rep GK Butterfield, Democrat of North Carolina and chairman of the Congressional Black Caucus, was quoted as saying.

Finally, with about 200 schools named after Confederate leaders, we join voices of people who don’t even want to see symbols of racism in their world—symbols that were intended as tributes to fallen soldiers or other honorable causes but have taken on a deluded racist meaning. We also ask school districts to rename the offending schools, just as we take down our Confederate flags.

We stand united, we don’t celebrate those who would tear that union apart, and we should not perpetuate racism anymore. It is directly responsible for deaths, not just from militarized police officers, white supremacist gunmen, or healthcare disparities, but also from policies our schools enact that provide a lower quality education to low-income children of color.

“More consequential than that flag is our flawed system of school finance that perpetuates inequity,” writes Nicholas Kristof in the New York Times. “Black students in America are much less likely than whites to attend schools offering advanced science and math courses.”

Money isn’t the only problem in those schools attended by black students, of course, but it is the largest institutional factor that stems from racism. People who know very little about this problem tend to bring up districts like Baltimore, predominantly black, where per-pupil spending is thousands of dollars higher than it is in districts that yield better academic results.

Let’s not go after this red herring. The main reason the money doesn’t lead to better outcomes in Baltimore is that the schools waste a lot of it. There’s also fraud.

I agree on some level, though, that changes need to happen not only within fiscal government policy, which does perpetuate institutional racism, but also at the local level in classrooms, where we could spend more efficiently and get money more directly to places where it will help kids. It’s also plainly true, though, that racism rears its ugly head in the dollar amounts the government decides to spend on schools.

We can change that if we try. Early childhood programs, for example, spend money very efficiently. You get a lot of bang for your buck with those, and public schools in predominantly black areas, like Baltimore City, are the least likely to provide early childhood programs that provide services such as home visitation, high-quality preschool, and literacy programs.

A Stanford University … simple, inexpensive program called Ready4K! … simply sent three text messages a week to parents to encourage them to read to their preschoolers—and it was astonishingly successful. Parents read more to children, who then experienced learning gains—and this was particularly true of black and Hispanic children. And because this was text messaging, the cost was less than $1 a family for the whole school year. (Stanford’s press release.)