As of June 25, 9.98 inches of rain had fallen in Baltimore since June 1, the NWS said. The total for the month exceeded the previous record of 9.95 inches, set in June 1972 with Hurricane Agnes. That storm also caused a record rainfall in Washington, D.C., just south of Baltimore, as 18.19 inches of rain fell there during June 1972. An average June in Baltimore gets 3.46 inches of rain. Records in Baltimore go back to 1871.

Baltimore’s rainiest months since January 1871 (before this month) 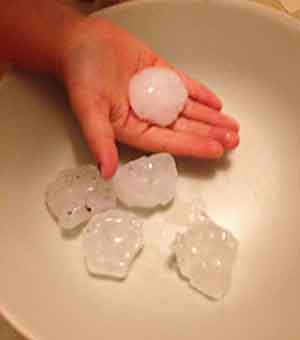 And although the number will go higher, because it doesn’t include the rain that is falling today at BWI, it did include rain from a storm Tuesday evening, June 23, which brought hail the size of at least a baseball to the northern part of Baltimore County (see pic to the right above).

Just as hail was beginning to fall, one woman I saw, who ran from her car to a pharmacy in Cockeysville, just north of Baltimore, suffered at least two lacerations on her thumb and hand as she used her hands to shield the top of her head from the hail during her brief run from the parking lot.

In addition to personal injury for people who got caught outside when the hail started coming down, several homes and vehicles were damaged by the hail. Several tree branches were broken off and scattered by the high winds onto major roads, which then had to be closed so crews could clean off the debris. Some hail, with very sharp edges, was reported to measure nearly 4 inches in diameter, the size of a grapefruit, according to a report on Weather.gov.

Around 5:45 PM, a hailstone was found in the front yard of a residence 2 miles north-northeast of Timonium, Md., that measured 4.0 inches in diameter—grapefruit size. This is only the fourth case of hail measuring 4 or more inches in Maryland from records dating back to 1950.

The largest hail on record in Maryland since 1950 is 4.5 inches, softball size. Hail this size has been recorded twice: once on April 20, 2002, in Charles County, associated with the supercell that produced the La Plata EF-4 tornado. The other 4.5-inch hailstone fell on June 18, 1970, in the Phoenix-Jacksonville-Cockeysville area of Baltimore County.

The other known 4.0 inch-diameter hail report in Maryland was on July 31, 1999, in northern Baltimore County, near Hereford.

As of 5 PM Wednesday, the day after the hailstorm, Baltimore Gas and Electric Co reported 1,600 customers were without power, most of them in Baltimore City and Baltimore and Anne Arundel counties. Delmarva Power reported 1,200 customers still without power in northeastern Harford County and 3,500 outages in Cecil County, according to reports in the Baltimore Sun.

Lots of snow and closures in the Northeast

Chicago gets dry snow & a little wind on VDay